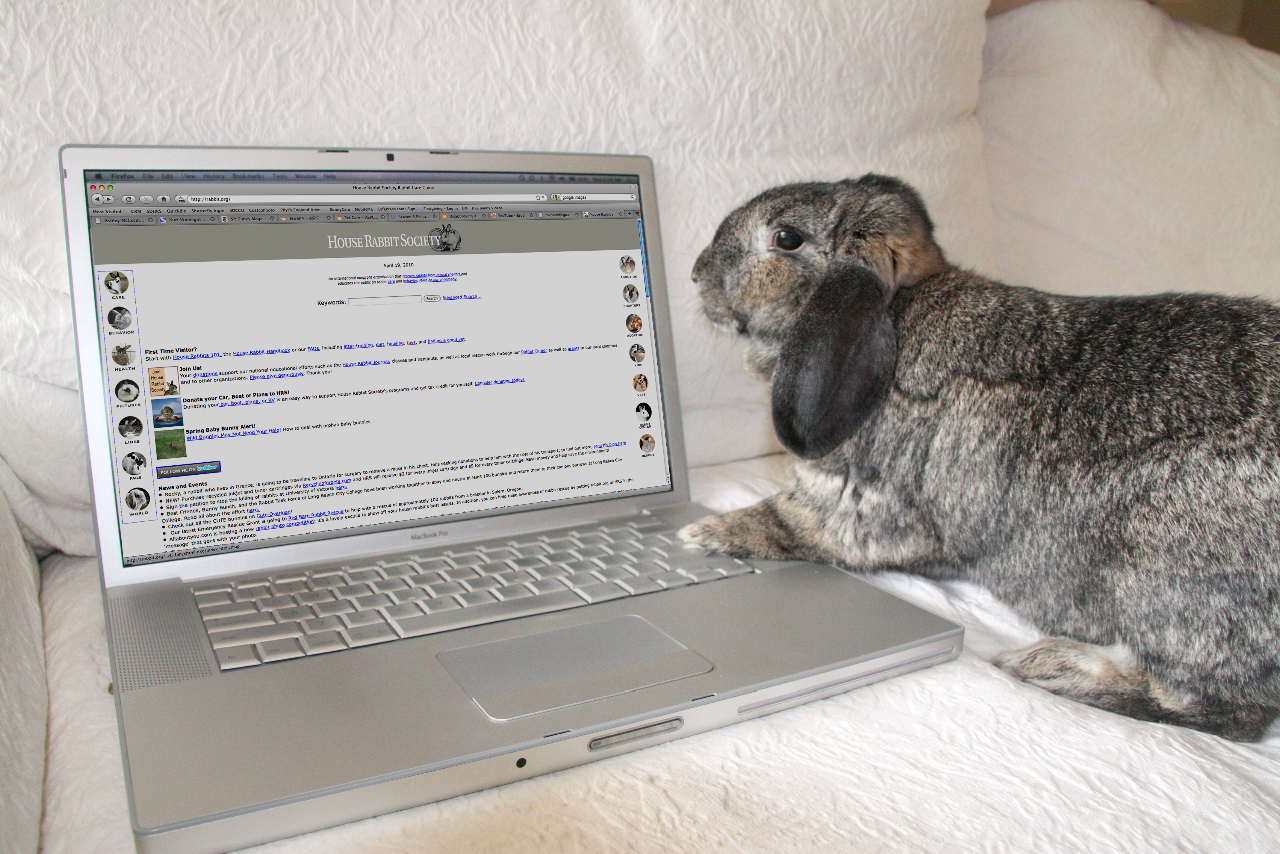 A Force from the Beginning

Since the earliest days of the Internet, rabbits and all things rabbit have been flourishing online. A Google search of “rabbit” in mid-2008 led to 114 million hits, with the House Rabbit Society’s website, www.rabbit.org, as number one.

Rabbits have, in fact, been a force on the Internet since the earliest public use of the new technology. Rabbit.org for example, was created in 1994, and attracts about 50,000 visitors per day to learn about rabbit care and behavior, and to view the bunny pictures on our Rabbit Randomizer page), which is, oddly, our most popular page. Listserves such as Etherbun, Petbunny, and in the 1990s, newsgroups like alt.pets.rabbits allow rabbit lovers from around the world to chat with each other about rabbit issues, and the Bunderground Railroad, run by RabbitWise in Maryland, is a virtual system of volunteers who transport rabbits across the country to aid rescue groups. Thanks to the immediacy of online communication, life-and-death health information, emergency rescues, and assistance of all kinds is available at the touch of a button.

Because rabbits are a non-mainstream companion animal, it’s often difficult to find good quality food, toys, housing or supplies for rabbits, especially in one’s community. The Internet was the first place (and is, for many people around the world, still the best place) that small companies devoted to selling high quality rabbit supplies flourished. Busy Bunny, Bunny Bytes, BunnyLuv, Cats & Rabbits & More, and Leith Petwerks were some of the first online rabbit supply stores. Because quality rabbit food and hay is often hard to find, many rabbit folk order their food and hay from online companies, and have it delivered to their homes.

Websites devoted to individual rabbits allow rabbit lovers to highlight rabbits in all of their glory, and include everything from static pages of bunny photos to “bunny cams” like Brooklyn Bunny Cam which follows Roebling the bunny’s daily activities, to memorial websites, to Disapproving Rabbits which features close up photos of Sharon and Bill Stiteler’s rabbits, accompanied by funny captions.

Perhaps thousands of rabbits have their own MySpace and Facebook pages, which allow rabbits and their humans to blog, chat, share photos, videos and links, and in 2008, two Bay Area HRS members, Andrea and Uwe Schroeder, created Bunspace, the social networking site created exclusively for bunnies. Thousands of rabbits have their own pages here, and rescue groups use the site to promote rabbit adoptions as well.

One of the most intriguing sites is the website devoted to Oolong, a Japanese rabbit whose guardian, Hironori Akutagawa, took hundreds of photos of him with objects on his head, until his death in 2003. Known as “head performance art,” Oolong’s online photos (and those of his successor, Yuebing) were one of the first examples of a virally-transmitted Internet phenomenon known as a meme.

Youtube is another location where rabbits are extremely popular. The most common rabbit video on Youtube is the simplest-videos of house rabbits, doing house rabbit things, sometimes set to music. Since the development of Youtube and the technological developments that have made making home movies so simple, people around the world are filming their animals and uploading their videos online. Interestingly, rabbits appear to be more popular subjects for such videos than even cats and dogs. Marlene Larkin, an HRS member, has made a number of wonderful videos for HRS and her videos can be found here. Videos of animated rabbits such as those featured in 30-Second Bunnies Theatre  and talking rabbits like Buns and Chou Chou of Rabbit Bites  are also extremely popular. Rabbit Bites even made a video in celebration of HRS’s 20th anniversary, telling the tale of how Buns was rescued.

Of course, while the Internet is a place for rabbit lovers and advocates, it is also a place for people who treat rabbits as resources, for example, those who disseminate information about rabbit hunting and rabbit meat sources and recipes, and groups like the American Rabbit Breeders Association and the Professional Rabbit Meat Association use the Internet to organize their supporters.

One unusual website that attracted the outrage of rabbit lovers around the world was SaveToby.com, a website from 2005-2006 that threatened that a rabbit named Toby would be killed and eaten unless the owner of the website received $50,000 from the public. This website, and the copycat sites that followed, was most likely a hoax, and while no rabbit appears to have died, thousands of dollars were evidently sent in to the website in order to save the rabbit from death.

Activism is an important use of the Internet, and rabbit people were quick to recognize the value of this technology for their animal welfare efforts. Email is now the easiest way to quickly send out alerts to members and supporters about issues facing animals, and rabbit lovers have used this technology to share information about the sale of rabbits by large retailers like Petco and PetSmart, to tell people about restaurants that serve rabbit meat or about newspaper articles about the subject, to let people know about companies selling rabbit fur garments and products, and to try to discourage the public from buying rabbits as Easter gifts. Email alerts have also been successfully used to stop local communities from killing wild or feral rabbits, and to put a dent in cruel practices like rabbit coursing, and groups like East Bay Animal Advocates and Coalition to Ban the Production of Fur highlight undercover videos on their websites of rabbit meat or fur production facilities. The Rabbit Activist list on yahoo groups  is a great resource for folks who want to keep informed about rabbit abuse issues or who want to let others know of an issue of importance.