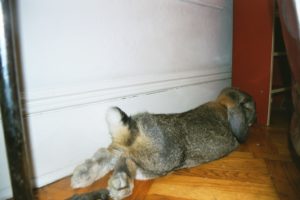 As an adoption counselor I am often asked, “Which breeds are good with children?” Or people will say, “I have a small apartment, so I want to get one of those miniature rabbits.” What’s wrong with these statements?

The main problem is that there are as many exceptions as there are rabbits who fit the description of a particular breed. A related issue is judging an animal by appearance rather than by personality. Anyone who has watched a dwarf rabbit dash from the kitchen to the porch by way of the couch, from about 3 AM through mid-morning will understand immediately the small apartment/small rabbit fallacy. The fact is that there is no apartment too small for even the largest rabbit. And if there were a safe generalization to make, it would be that larger rabbits tend to be less active and therefore require less space than the dwarf breeds.

So beware of sentences that begin “Lops are…” or “Angoras are…”. Such generalizations usually act as screens that obscure the particular, individual animal and focus instead on a (usually inaccurate) abstract. And while it is true that we’re all born with personalities, that we (rabbits and humans alike) do not come out of the womb as blank slates, it is not true that there is a gene called “good with children.” Most rabbits, if they are bred intentionally, as opposed to accidentally, are bred for appearance, not personality. The science of genetics has enabled humans to create a rabbit with a white body and brown ears, nose, feet, and tail, in both large (Californian) and small (Himalayan) sizes but not one who has an innate enjoyment of being grabbed by small sticky hands.

The soul behind the face

In terms of appearance, it is much more fruitful to read the individual rabbit — her facial expression, her body position– as opposed to the color of her fur. Gentle rabbits have gentle faces, regardless of breed. Worriers look worried. They rarely roll over on their backs or lie with their back legs extended behind them. Mellow rabbits lounge around any old way, dangling from your arm, in the middle of a busy room. Irritable rabbits have pinched, crabby facial expressions, just like that nasty bank teller who makes you feel like you’re imposing on her when you withdraw your money from her bank. As a student of rabbit nature, these are the observations to treasure.

Hand in hand with breed generalizations go breed preferences. House Rabbit Society fosterers often receive requests such as “We’re looking for a French lop”; or “Our last rabbit was a Dutch. Do you have any of those?” Isn’t the underlying emphasis here again on the abstraction rather than the individual? Even if there were an “Angora personality,” aren’t there also exceptions, variations, contradictions? Which relationships between humans tend to last longer, those based on physical appearance or on personality?

One of the great dangers of breed generalizations is that they can become self-fulfilling prophecies. If your dwarf rabbit bites you, oh well, everyone knows they’re irritable, and nothing can be done about it. More than one dwarf rabbit has ended up at an animal shelter because of behavior that would have been accepted and dealt with in a breed that doesn’t have a reputation for aggressiveness.

Another insidious aspect of stereotyping is it allows entire groups of animals to be categorized and then discarded. The terms “lab rabbit” and “meat rabbit” are examples. What’s the difference between a lab rabbit and a house rabbit? Not a thing, as anyone can tell you who has rescued the former and watched her transform into the latter. It’s all in the name, but the very act of naming supports the notion that some rabbits belong in labs and some in stew-pots.

And where do all these grand notions leave that special character, the mix-breed? Implicitly, if not explicitly, breed generalizations favor the pure-bred rabbit. The mix-breed is viewed as a second-class citizen. When applied toward the human species, this type of attitude is, at best, snobbery, and more often, bigotry.

We all make generalizations about other creatures all the time. These can range from the relatively benign to the positively hateful and dangerous. What is racism, sexism, speciesism, or any of the other us-against-them ideologies but a collection of generalizations based on appearance or lineage or religious preference? People who wouldn’t dream of making generalizations about humans based on a person’s “breed” (e.g., nationality, ethnic background, etc.) feel quite comfortable in sizing up non-humans by the color of their fur or direction of their ears. To say that lops are mellow is no different than saying that blondes are dumb or Sagittarians tactless.

Your rabbit is his very own self and nobody else. The process of getting to know him, and vice-versa, requires no generalizing. In fact, it is a very particular experience, shared by the two of you. His beauty does not reside in whether he has “papers” any more than his love for you is based on your ancestry. Once the blinders of generalization are removed, the world becomes a much more interesting place.