In 1994, I wrote an editorial about the benefits and rewards of bringing parents and children together in the common cause of rescuing and fostering animals. That was based on my experience with my daughter, Tania. Today, I value that experience more than ever.

In May 2009, in an effort to pay tribute to my dear friend Amy Espie, I compiled some of her articles and images into a web video. While a 10-minute video can’t begin to cover the scope of her work, it was a way of continuing her message after her passing. Amy spent her life making animals happy. On June 23, 2009, still reeling with the shock and grief over Amy’s death, Bob and I were totally unprepared for Tania’s diagnosis of metastasized cancer. She passed away on July 23, 2009.

A few weeks later, veterinarian Dr. Carolynn Harvey expressed regret that an emergency at the clinic had caused her to miss Tania’s memorial service. I assured her that Tania would so much rather have her take care of an animal than attend her service. What Tania wanted most of all was for animals to be happy.

Amy and Tania were kindred in their love for animals. They had formed a lasting friendship. Since the early history of HRS, lifelong relationships have developed among the people who have come together in its mission. Amy was one of the founders of HRS, and her philosophy was forged into its creation. She taught our earliest volunteers the fundamentals of rescuing and fostering and working with shelters. Amy is known mainly for her prolific writing and her photographic images that promote respect for animals. And for those of us who knew her personally and benefited from her example, she was our mentor.

Tania was active, behind the scenes, during HRS’s formative years. She went with me on rescue missions to the animal shelters and was responsible for taking in our first disabled rabbit, Scooter. She transported rabbits to and from the neuter clinic for all of our early volunteers and became the first pet sitter for many of us. Taking cues from Amy, Tania often went on “photo assignments” for the House Rabbit Journal. Amy and Charlie, while still living in California, fostered a wide variety of animals, and Tania was their satellite fosterer, pet sitter, and backup dog walker.

As HRS work continues, I hope that human bonds will be as much a part of its future as they were in its past. As I was recently sorting through a box of Tania’s keepsakes, I came across a get-well card from her namesake cat in Virginia, mailed by Amy in 2005, when Tania had a minor surgery. I will always treasure it for its insight into the warmth of their relationship. It’s the kind of thing that makes kindred spirits happy. 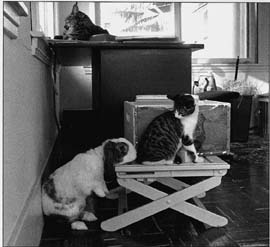 I hope you remember me, from way back when-because I remember you, even though I was so young when you saved my life. You called me Mirth, but I wanted to hear your name spoken every day. I’m almost 15 now and still of course very witty and beautiful and perfect. My humans call me Tan-tan and Tanni-woo (humans don’t seem to mind being idiots) and Wee Squeak (for my delicate way of announcing my presence) and a hundred other richly deserved endearments. We have all manner of strange creatures living with us. We are all thinking of you and hoping you will be well soon.