The first two House Rabbit Journal behavior articles (Volume I, numbers 1 & 2, May & June 1988) discussed the importance of spay/neuter. Twenty years later this topic remains the bedrock of everything behavioral that we have learned and published. Without this surgery, would we even have house rabbits? Hormones compel rabbits to mark territory with urine and feces. Females engage in nest-building by digging and shredding carpets, furniture, wallpaper, and the unwary. The waxing and waning of their hormonal cycles cause fearfulness, irritability, and aggression. Males, too, become aggressive as they reach sexual maturity. This is a phase when baby rabbits find their place in the hierarchy of the warren. They may do this by being actively aggressive or simply by refusing to display submissive behavior. When the warren includes humans, this natural behavior can be fatal: no one wants an aggressive rabbit.Spay/neuter allows our rabbits the harmonious companionship of their own kind. Twenty years ago, little was known about rabbit/rabbit relationships other than as brief episodes of mating and the few short weeks that mother and babies are together before being separated and sold. What an amazing world this surgery has revealed, not only for our rabbits but also for us, as we observe and learn. Put two rabbits together, regardless of gender and reproductive status, and the most common initial result is chasing, mounting, and fights that range from minor posturing to serious smackdown. Remove hormones from the equation, minimize territorial aggression, season with a dash of time, and sparring partners become inseparable friends. Chasing, nipping, mounting, and boxing become cuddling, grooming, and power-napping.There are people who object to spay/ neuter as unnatural. When humans are sterilized against their will it is a great violation. But unsterilized humans can explore and partake of all the essential social relationships, from casual aquaintance to deep love. Rabbits can’t. We must choose for them-the brief contact where eggs are fertilized, or a lifelong, 24/7, deep bond? Spend time with a bonded pair, and the choice is deeply obvious.

Physical health, too, is linked to spay/neuter. Certainly hormones are “natural,” but so are cancers of the reproductive system, the physical stresses of pregnancy and nursing, and the bite wounds and abscesses of fights. Wild rabbits are designed to reproduce a lot and die young. That is Mother Nature’s survival strategy for them, and in Mother Nature’s world, this works well. Individuals die, usually before their first birthday, but the species continues. Since domestication by definition deprives them of their natural world’s benefits, it seems only fair to make up for this by providing such advantages as are offered by the tamed life. Veterinary care and deep, satisfying companionship of their own kind top the list. 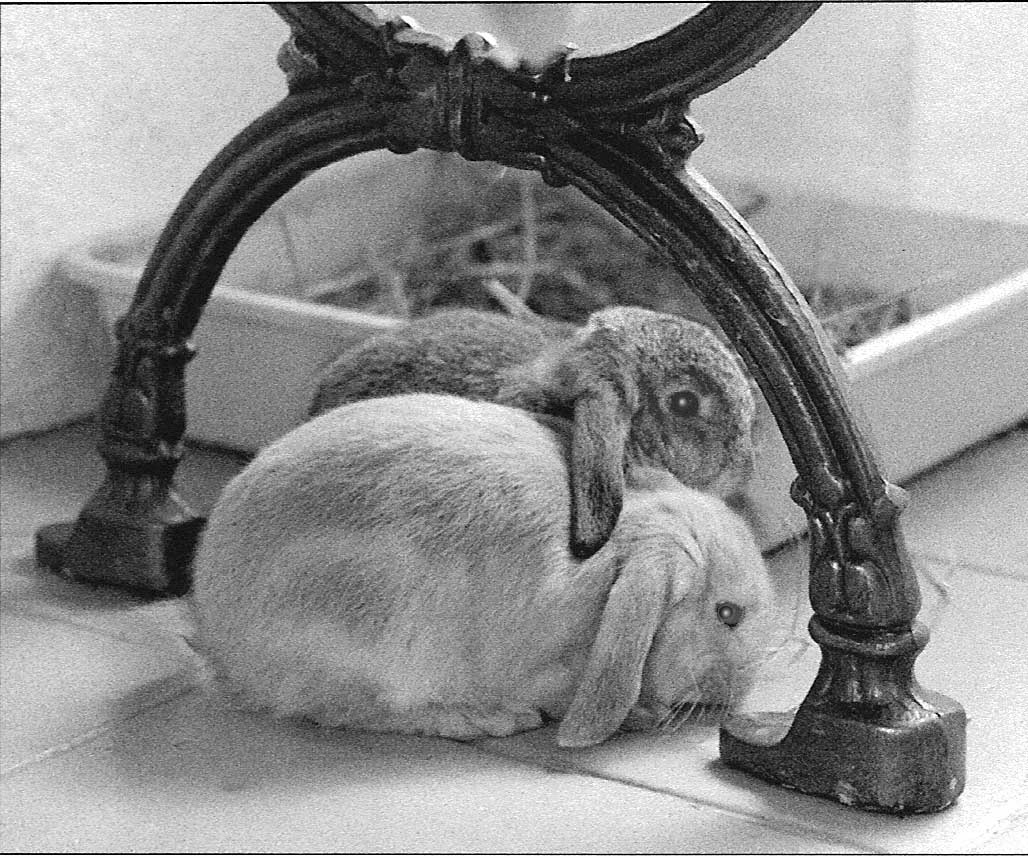 HRS was created for two primary and related objectives: to support shelters in finding homes for abandoned rabbits and to educate people on rabbit care and behavior. The connection is that when people are educated, rabbits are much less likely to be abandoned.

When faced with a problem behavior, identifying the underlying cause is not only the first step in changing the behavior; it is also the best way to defuse frustration and anger. Any behavior that has gone on for more than a week is well on its way to becoming a habit. There are rarely quick fixes when dealing with these problems. Knowing why a rabbit is deconstructing the dinette or debasing the baseboard helps us get through the early phase of problem-solving when visible results have not yet had time to appear. Without this information, there’s a strong risk that the “solution” to the problem will be to abandon the rabbit, at a shelter if he’s lucky, by the side of the road or in a field if she’s not.

In 1988, the behavior of spayed/ neutered rabbits was unmapped territory, and we set out to explore, noses twitching and ears swiveled forward. Most of what we learned came, then as now, from daily life in homes shared with rabbits. Spay/neuter played a key role in transforming the isolated, withdrawn creatures confined in outdoor hutches into the gregarious, intelligent, and often hilarious individuals who share our daily lives. Our beloved spayed/neutered rabbits leave a legacy more precious and unique than DNA or physical descendants. Everything we have learned in the past 20 years—everything we will learn in the next 20—we owe to them.

Since our 1988 founding, House Rabbit Society volunteers have fostered over 8,100 homeless rabbits. Who are these creatures? How did […]

How to Rescue a Rabbit Running Loose

Rabbits are prey animals, and as such, can hide their symptoms when sick. It’s up to you, then, to watch […]