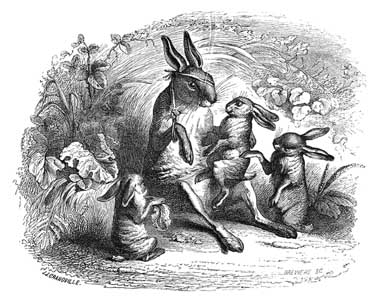 Between 1840-1842, the publishing house of P.-J. Hetzel and Paulin in Paris issued an impressive, two-volume work: Scènes de la Vie Privée et Publique des Animaux, whose title in English is Scenes from The Private and Public Lives of Animals. It was a collection of short narratives by many authors; and in each an animal or insect told a story from his life. The books were intended both as social satire and as a showcase for the genius of artist J. J. Grandville. Of particular interest for our purposes is “The Story of a Hare,” the first tale of the collection. Before the “Story of a Hare” begins, a “frame story” by P.-J. Stahl, a pseudonym for the author and publisher Pierre-Jules Hetzel, introduces Volume I. In it, the animals of the world send representatives to a congress to discuss their complaints about humans:

“Weary of insult, ignominy, and the constant oppression
of man, we, the so-called Lower Animals, have at last resolved
to cast off the yoke of our oppressors, who, since the day of
their creation, have rendered liberty and equality nothing more than empty names.”(xiii)

The frame device intermingles two literary traditions. The first is the “complaint,” in which an individual-and historically this can include an animal or personification of nature-laments his or her state. The second entails an assembly of animals, usually birds, engaged in debate that leads to some agreement or contract. In The Private and Public Lives of Animals, the animals resolve to publish their grievances-and hopefully change human behavior-by producing a book.

Like the frame, “History of a Hare, Written from Dictation by the Magpie” is written by “P.-J. Hetzel”and uses the complaint tradition to critique humans from an imagined animal point of view. An old hare, suffering from wounds inflicted by the rabbit-keeper’s dog, gathers his grandchildren around him to tell them his life’s story. He explains that when he was young, his mother and 500 other hares were killed at one time by humans with guns (“Were there no men on earth, it would be the Hares’ paradise” [4]). He reports that at that same massacre, he was captured in a basket by the king’s footman. Spared only because of the pleas of the footman’s young daughter, he is kept in tedious bondage: “I began to hate the monotony of my new life. What would I not have given for one hour’s liberty, and a bit of thyme” (7). One day his boring life is violently interrupted. The footman loses his job and now seeks to make an easy living displaying the hare performing tricks on the Champs Elysées. When he mentions the name of a popular hero, the hare must fire a cannon and play a roll on the drums. One day, eventually, the entire show is attacked by the crowd.

In the mêlée, the hare escapes; but he becomes entangled in a ditch with a new human, this time, one very much like himself: “He had a man’s body, it is true, but from his honesty, and the gentle expression of his face, I felt certain that his ancestors had belonged to our race” (16). The man is humble and poor, and makes a miserable living as a lowly clerk in a government ministry. He has a son who resembles him closely. Unfortunately both soon die, broken by poverty. The hare is left alone in their bare room but manages to escape into the streets of Paris and then back to the woods.

The story then shifts into fable. In fable, the animals are window dressings for specific human personality traits, and the interaction between them is more simple than in stories of animal parliaments. Fable also ends in a clearly stated moral. In the fable at the end of “Story of a Hare,” the hare meets a quarrelsome rooster who challenges him to a dual, and the rooster is killed (moral: a wrangling nature can be one’s undoing). The “Story of Hare” ends with a philosophical consolation, which is often part of the complaint tradition. The hare declares that happiness lies in the way that animals live their lives:

“The present to us is everything.We live for today. Men live for
tomorrow. The tomorrow that is to be brimful of joy. Alas!” (21).

Grandville’s illustrations depict the story’s characters as animals engaged in human activities and human wearing human clothing. In other words, they create convoluted relationships between humans and animals, as well as between anthropomorphism and naturalism. Certainly the drawings appear to express shared human-animal attributes that challenge the culturally constructed boundary between humans and animals.

Two examples are the drawings of the poor father and son.* In the story, these individuals are human; and so Grandville lago-morphizes them in making them hares. He also represents them-especially the son-with a demeanor of”abjection.” The father and son have been mere functionaries in a government bureaucracy, living to serve their “superiors” at mortal cost to themselves. Just so has the hare’s life in Paris been lived solely to serve human desires. These characters are “abject” in the sense of having been made servile, dispirited,reduced and resigned to their state as object. Did Grandville borrow the “look” of animals who live in conditions under total control of humans-humans who use the animals only for themselves-in order to visualize human abjection? It is hard to know. But the likelihood seems that he and author P.-J Hetzel may have intended something along these lines.