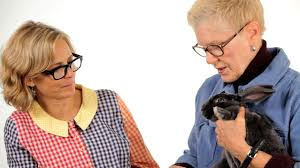 In the rabbit care videos, Dr. Cotter and Ms. Sedaris informally discuss a host of topics of interest to rabbit caretakers and anyone considering adopting one of these irresistible, but high-maintenance pets.  The videos cover topics such as how to rabbit-proof your home, how to litter-train your rabbit, and how to tell when your rabbit is sick.

“There is a whole list of things that people should consider before acquiring a rabbit,” said Dr. Cotter.  “Unfortunately, far too often parents buy a bunny for their young child on impulse, not realizing how much care the pet requires, and after a couple of weeks they end up regretting their decision.”

“Some of the important things they should know,” she added, “are that an adult must be the primary caretaker, that adequate rabbit-proofed space for exercise is needed, that their pet cannot be left alone on weekends, and that rabbits need veterinary care, which can be more expensive than care for a dog or cat because rabbits are considered exotic animals.”

Cotter has lived with and studied rabbits for over 30 years.  She acquired her first rabbit in 1982 from the Photo Editor at People Magazine where she worked as a contributing photographer.  She adopted her next two rabbits while working as a creative director at JMCT Advertising and completing her doctorate in education at Columbia University, Teachers College.  “Rabbits helped me maintain my perspective and my sense of humor during times of intense stress at both work and graduate school,” she says.  “Their engaging nature, hilarious antics, and readiness to forgive the many faults of their human caretakers make them wonderful companion animals for busy adults.”

After completing her doctorate, Cotter volunteered at a private veterinary practice in New York, and began offering lectures and workshops on rabbit care and husbandry in the NYC area.  Eventually, in order to broaden her ability to work with veterinary staff, she decided to obtain a license in veterinary technology. She earned her associate’s degree from LaGuardia Community College in 2004 and joined the veterinary technology faculty there as Adjunct Assistant Professor immediately after receiving her NY State license.

Cotter also serves as vice president and Education/Outreach Director of House Rabbit Society, the largest rabbit rescue organization in the world, and the founder and president of Rabbit Rescue and Rehab, a licensed chapter of HRS.

It was through House Rabbit Society that Howcast approached Dr. Cotter, who suggested to the producer that Ms. Sedaris, who adopted a rabbit from her 11 years ago, be invited to team up with her.  “Amy has accumulated a wealth of knowledge over the past decade, and has been very active in educating other rabbit caretakers,” said Cotter.  “We have both wanted to do a series of rabbit-care videos for the past few years, so this was a perfect opportunity.”

The videos can be viewed here.