Kenny is my Flemish Giant that my fiancé Mike and I adopted from the St. Louis House Rabbit Society. He is our first bunny and we are inseparable. Kenny was about 4 months old when we adopted him. Mike and I were so proud to talk about Kenny and “show him off.” We enjoyed educating other people about what a wonderful pet he and other rabbits can be. We nap together, clean house together, spend almost every hour after we get home from work together. We were a very happy family. But not for long. Not two months after adoption, disaster struck. 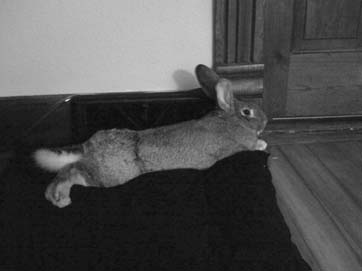 I recall it much like a movie horror scene- when all is silent, and all you see is a montage of short, still shots flickering across the screen.

We decided to bring Kenny with us to Mike’s parent’s house for dinner. They had not an excellent opportunity to do so. After arriving and introductions, we decided to take Kenny downstairs, where it was much cooler and safer to hop around. Most bunnies loathe being held. Kenny is no exception. He can out-squirm any restless toddler, and will resort to biting if he isn’t put down right then and there. Rabbits are also twice as strong as you think they are- and the bigger the bunny, the stronger the kick. I think this is something that most non-rabbit owners underestimate.

Kenny’s carrier is upstairs, somewhere. An overwhelming feeling of laziness combined with my motherly drive to hug and squeeze my “baby” bunny tells me to pick him up and carry him down the stairs. Once at the bottom, Kenny starts his squirm and pout routine. “Ok. Settle down, let me find a spot to set you down”, I calmly tell him, half expecting him to answer. Only he realizes something I do not. There is a cat in the room.

I think fast. I have two options: have Mike grab the cat and run upstairs or risk putting Kenny down right now before he starts scratching and biting. I don’t think fast enough and Kenny makes up his own mind. He kicks, wiggles, and leaps out of my arms. Onto the floor. Sideways.

An emergency after-hours drive to the rabbit vet, Hope Animal Hospital, which is almost two hours away, yields difficult news. Kenny’s hind leg is shattered. It is so severe, splinting is impossible. We are given two options-amputation or euthanasia. I was so overcome with uncontrollable, hysterical crying that I become ill. My body shakes. I cannot see straight. Mike and I morph into shells.

The vet, Dr. Linda Beisswenger, (D.V.M. / Miracle Worker) realizes that we are incapable of not only driving home, but making a decision as to how to proceed for the night. She suggests taking a day to consider.

Pat Daly, a St. Louis HRS Educator who had been with us from the start, had made the grueling drive out to the Animal Hospital that night. We didn’t ask her to. We surely didn’t expect her to. What kind of person drives all the way out to an animal hospital, in the middle of the night, an hour and a half away, in the rain, to comfort a crazy bunny-owning couple? An angel, that’s who. That night we couldn’t sleep, we couldn’t eat. We hugged each other and cried. And cried. And cried. We saw a toy, we cried. We smelled timothy hay, we cried. We saw his agouti brown bunny hair stuck to our clothes, we cried. I couldn’t even step foot in the basement- I was sure I would faint. I blamed myself. I still do.

The next day, we gathered advice from everybody. Pat Daly and her husband, Bill, had been busy with the HRS network contacting other chapters. The support from the HRS community was mind boggling. Suggestions, advice, and information came in at all hours of the night. Joy Gioia, the St. Louis Chapter Manager was wonderfully helpful. While maintaining the main foster home in St. Louis, she also works at Hope Animal Hospital during the day. Her rabbit knowledge is enormously vast. She gave us Kenny updates every time I called; she really kept us going.

While Joy was giving me updates, Dr. Linda had been busy consulting with other experts. By noon the day after the accident, we had a decent understanding of our options. Because of Kenny’s young age, the likelihood that he could learn to adapt without a hind leg was very high. Kenny was also a very active bunny. He got plenty of exercise, and had a very positive attitude. (Yes, bunnies have attitudes, another terrific privilege to being a rabbit mom.) The downside involved exceptionally high risks. He was already losing red blood cells, indicating internal bleeding. The surgery had obvious significant risks of its own, not including the recovery. Plus, even if he could successfully adapt with three legs, he would almost cermost certainly develop complications with the early onset of arthritis. Kenny still had a lot of growing to do, at least another 5 pounds, so there was large concern that his extra weight would cause too much strain on his back leg.

When we arrived to see Kenny at the hospital that evening, Mike and I knew what we had to do: we were going to risk amputation. We felt that even if that he could have a happy life for even a couple of weeks thereafter, it would be worth it. Simply put, we were only going to do what was best for Kenny. Mike and I had made the decision that if he failed to adapt, or his quality of life was poor, that we would agree to have him be laid to rest.

The surgery was scheduled for the next day.

I’m going to omit the amount of money a surgery of this nature costs. I don’t want a reader to debate whether the value of this monetary figure is indeed worth saving a life that was jeopardized by carelessness.

The surgery went flawlessly. I called Hope Animal Hospital about every five minutes for the next couple of days. I made the drive down there every single day, sometimes twice, to see him and give him treats. I wanted to let him know that Mike and I were still there for him, and that I was dreadfully sorry. Each time that we came over, he hobbled over and licked my forehead. Every day he could hop a little better and appeared to feel much happier. When we took him home a week later, he could almost hop perfectly. A week later, he was a superstar.

It’s been several months now and Kenny is doing terrific. He gets along just great. He runs, jumps, and causes all sorts of trouble. And oh, does he binky. They are magnificent. Most people don’t even realize he is missing a leg until we point it out. We call him our little pirate, because we joke that all he needs is a peg-leg and an eyepatch! We are happy again and we are both a little wiser. Since Kenny’s accident, Mike and I have devoted as much of our time as possible to serving and volunteering at the House Rabbit Society. We can only wish to provide the hope for other bunny owners as they have so wonderfully bestowed to us. Kenny has taught us so much about life and goodwill. I hope that his story can teach everyone a little lesson.

For the record, a rabbit’s foot is certainly not lucky! It’s the rabbit and his family that are.