For the past two years, a small group of volunteers in New Mexico have worked together to place rabbits from Albuquerque Animal Welfare. We also had been assisting an independent rabbit rescuer place some of his adoptable rabbits through our adoption events. Since we knew that he could not afford to neuter and spay them, we also paid for some of those surgeries. While we suspected that the conditions the rabbits were living in at this man’s house were not great (we knew the rabbits were living outdoors), we had no idea how bad those conditions really were. Eventually the situation spiraled out of control and Rio Rancho Animal Control was called in. He had taken in a group of about 40 lops, and did not have adequate housing for them. The rudimentary pens he built could not contain the rabbits, and they began escaping into his yard and the wider neighborhood. Uncontrolled breeding with each other resulted in over 350 rabbits living in horrendous conditions.

After Animal Control had been called in we realized the man was unable to care for or take responsibility for the rabbits. We arranged to visit the home for two straight weekends, where we spent the days catching rabbits, sexing them, separating them, and creating temporary housing for them. We borrowed cages, carriers, and ex-pens from our own volunteers and from local groups who offered their help.

At the same time, we reached out to rabbit rescue groups around the country, asking for help. Ultimately, 25 organizations from Washington State to Maine offered their assistance. Thanks to the help from those groups and 28 individuals from around the country who offered to transport rabbits to their destinations, 304 rabbits (as of this writing) were ultimately given a second chance for a good life. (Thanks to Bunspace and the Bunderground Railroad Internet groups for arranging much of the transportation.) We were thrilled to be put in touch with Tom Beard, a long distance trucker. He drove batches of baby rabbits in the cab of his big rig from Colorado to New Jersey, and again from Colorado to Pennsylvania where he was met by other volunteers who completed the long journeys.

One New Mexico HRS volunteer, Deb Schaefer, stepped up and created a schedule for volunteers to visit the home twice a week and clean and feed the rabbits. Other volunteers took home some of the rabbits who were compromised, and many of the babies were fostered at volunteers’ homes until they left for their new homes. Deb’s partner David Streubel, an attorney, volunteered his legal services to work with the city and to buy us more time.

Unbelievably, at the same time that all of this was occurring, Albuquerque Animal Welfare found itself faced with a separate hoarding case involving approximately 100 rabbits. They reached out to us for help, and while we couldn’t take in any of those rabbits given our own situation, we helped them to catch the rabbits who had been living in similar conditions in an Albuquerque woman’s yard. (We eventually took 18 babies.) Criss Starr, who coordinates our volunteers at the Albuquerque shelter, helped oversee this new crisis and ensured that these rabbits had all of their needs met while at the shelter.

Ultimately, we learned some hard lessons from this crisis. But we also used this crisis as the motivation to form a board, incorporate, file for federal tax exemption, and begin fundraising for real. At the end of this crisis, we have emerged stronger, and hopefully wiser, than when we started.

Coming Together to Face a Crisis 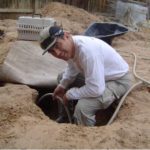 We approached the first weekend roundup expecting to find two large pens of bunnies-boys in one and girls in the other. I reluctantly accepted help from what I thought was too many people-about eight. I thought we could identify and “tag” the bunnies in a few hours.

When we showed up I was horrified to see burrows criss crossing the yard and bunnies running everywhere. We started capturing them at 1PM with one group wrangling and another group sexing and separating. Bunnies were hidden in every conceivable place-they were in sheds, under tires, behind woodpiles, and most notably escaping in to a maze of tunnels that was like spaghetti on a plate. By 7PM we were exhausted and had caught over a 100 bunnies.

The second weekend we showed up with twice the force and cages and x-pens lent to us by so many kind people and other rescue groups. We went to work systematically evacuating tunnels and collapsing them slowly as we determined them to be clear. The rest were slowly rounded up over a period of many weeks – one at a time as we were able to corner them.

I marvel at the fact that so many people have given so much of their time, money, and emotion to this rescue and how lucky we are to have so many volunteers dedicated to helping rabbits. The sadness for me lingers. The reality is that we have drained resources, not only locally, but nationally. As a small group we have used up every favor from dozens of groups across the country. The outpouring of support from all who helped us is humbling to me-from every $10 donation to every 500-mile drive, and every cage we were loaned – the humanity warms me. It is also saddening to know that we are now tapped out. I recently received a plea from a shelter 200 miles south of us. In the past we have helped them place bunnies. Now they had 16 more than they had spaces for – I had to say no, and the hardest part of that was wondering what we could have done if we had not used our resources on this crisis. 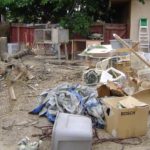 With hundreds of rabbits living in pens and cages that we set up in the yard, we were faced with the problem of continuing to care for these rabbits until they could be moved to safety. We are lucky that while we are a new, small group, we have some dedicated volunteers who were willing to work through the mud and the flies in cleaning the cages and pens to keep the rabbits healthy. We set up a twice-weekly cleaning schedule and we had from 2-6 volunteers each Tuesday and Friday night come over to clean. The work was difficult and filthy-especially during New Mexico’s notorious monsoons, which would dump inches of rain on us in a matter of minutes. However, the volunteers were gratified to know that what they were doing made a real difference in the lives of these rabbits, who got to sleep on soft, clean straw rather than mud. I’ll be forever grateful to the volunteers for taking time out of their summers to give these rabbits a chance at a better life. 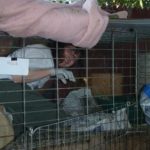 Rabbit rescue is not just playing with bunnies.

Rabbit rescue can be hard physical labor. Catching rabbits who have been living underground involves digging into the ground and wading into piles of rabbit feces. When you do catch a rabbit, you will be scratched and possibly bitten. Ongoing care involves cleaning dirty cages, often in the rain.

Rabbit rescue is an emotional roller coaster. While it may be exhilarating to know that you have saved many rabbits, you will be unable to save them all. 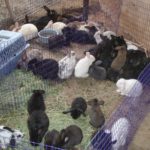 Rabbit rescue is exhausting. The work isn’t over when you leave the rescue site. It will haunt your days and wake you up at night. It will make you angry and sad and tired.

Rabbit rescue is worthwhile. In the long run, you can look back with pride, knowing that your efforts saved bunny lives that would otherwise have been lost.