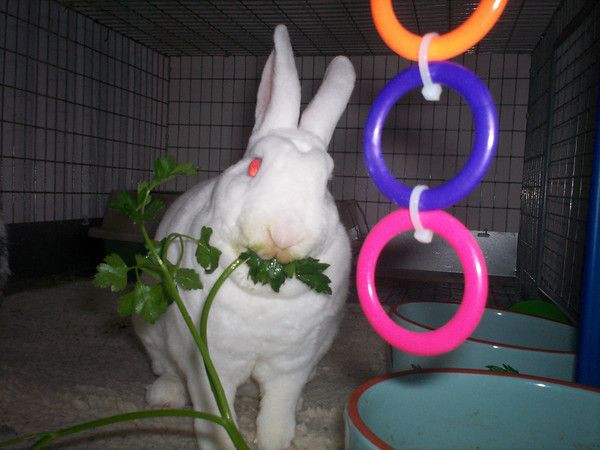 On January 1, I finally obtained a new rabbit from the SPCA to start again after my first rabbit died at the age of 5 years. This new one, a -6-month-old female lop, remained aloof and skittish but took well to house training. I accepted that she would not be as close a companion as my first rabbit had been. I named her Velvet.

Then on February 28, someone left a rabbit on my doorstep. A note was attached telling me what she liked to eat. I found that she was a real lover. She is a silver lop, about 1 year old. I know that females don’t usually get along, so I confined Foxy, the new one, to my spare bedroom. I soon realized that she would need to be spayed. She ran circles around me, sprayed and generally acted as a normal female. I also let the two get close. Velvet immediately attacked Foxy.

I had both rabbits spayed and let them heal. Then, I cleared the spare room and put them in together. Of course, the fur flew! When they got too good a hold on each other, I gently separated them with a broom. They went hot and heavy for 10 minutes, then spread out at opposite sides of the room, panting heavily. This went on for an hour. I separated them for the night. The next morning, we started again. This time I left the litter box in the room. When Foxy, the meek one, wanted a rest, she would jump into the litterbox. Velvet\ would see her, sniff her, and leave her alone. This went on for a couple of hours.

The fighting was slowing down, so I opened the gate and let them have the whole apartment. Foxy would run like crazy, and Velvet would chase her, growling. Occasionally, Velvet got some hair from Foxy. This went on each day for a week. Little by little, the chasing and running in fear turned to play. Foxy is a real people-rabbit. She comes when called by a tap on the floor and flattens down to be petted. Velvet is still shy and does not like being touched.

Today, they are together, grooming each other, eating together, and snuggling together. Foxy’s left eye is always tearing and Velvet keeps it clean! The only place that is forbidden to Foxy by Velvet is my bedroom, under my bed.

Who Wants a Mean Rabbit?

Will They Ever Be Friends?

For most rabbits, a buddy of their own kind enhances life. By nature gregarious, they enjoy having someone around who […]