Much is made of the way that infant animals will imprint onto an adult of another species when this adult is the first being in their new lives. Apparently they either assume that the adult is a member of their own kind or they fail to have a sense of their species. But this certainly does not explain bonding between very different adult animals. That relationship entails the more interesting process of animals actively changing their views of partnering in order to be mutually compatible. The recent bonding between a rabbit at my house and a new, very strange roommate reaffirms my long-held intuition that rabbits not only make choices about their partners but modify their attitudes in the interest of a relationship.

When Fivespot lost his mate, I tried to match him with each of my widowed rabbits, but none seemed quiet right. Then I saw a chinchilla and remembered that many years ago I had place a rabbit in a home with two chinchillas. I was told that Mercedes had been at the shelter for over a year, that she would bite “a little,” and that a new litter of chinchillas had just come in. With some trepidation-taking in a new species made me anxious after feeling fairly competent with rabbits for so many years-I arranged to adopt Mercedes for Fivespot.

I set up appropriate arrangements for Mercedes in Fivespot’s room: a cage with an exercise wheel, platforms with hard flooring on staggered levels, and a sandbox. My intention was to keep her caged except during supervised playtime. On first seeing her uncaged, Fivespot and I had, I believe, a very similar reaction: “What the devil was that!” “Boing” ing from place to place, she seemed shockingly alien. Mercedes took a crash-and-dash approach to relationships, hurtling herself missile-like directly at Fivespot (and me) as if to intimidate us, and then turning heel and running. Fivespot seemed to detest her. I would see him chase her whenever she dashed at him. I regularly found wisps of Mercedes’ fur on the floor. Eventually, having given her lots of places to escape Fivespot’s teeth and having noticed that she was not actually getting bitten, I gave Mercedes free run and stopped supervising closely.

After a year had passed, I no longer found fur on the floor. I also noticed that Fivespot would hand around her cage, although I interpreted this as his message to her to stay put inside. I was wrong. One day I looked into the room and saw Mercedes draped over Fivespot’s neck. Horrified I thought she had pinned him down with her teeth. But, no, they were both asleep.

Something very personal had gone on between these two that radically changed their attitudes, and it had escaped me entirely. Now they sleep together every afternoon. Yesterday I saw Fivespot grooming Mercedes. Both have clearly modified instinctive behavior in the interest of a relationship. I believe that Mercedes naturally prefers sleeping somewhere dark and close. She has a little house in her cage for this purpose. She slept in this little cave every day until she started napping with Fivespot in the open room. 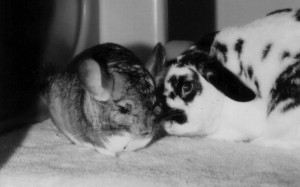 Fivespot is doing his part in this new arrangement. He is very vigilant during naptime, perhaps because Mercedes takes much longer to rouse from sleep. He keeps lookout while she descends into her deep, vulnerable sleep. Fivespot’s role became particularly evident to me while I was trying to photograph them together during naptime, the period when they are physically closest. I set up a comfortable niche that I knew would attract them and that would give me a chance to photograph them with plenty of light. For several days they went there to sleep, and I would sneak in and tickle Mercedes on the head to get her to wake up for the picture. Fivespot decided that this harassment was not acceptable, and he moved their sleeping place to different parts of the room, each of which he would abandon as soon as I rudely followed them there. He also became increasingly alert during what were supposed to be his own down times. He grew increasingly cross with me, so I gave up the project.

I believe that both Fivespot and Mercedes have re-imagined each other as partners. I am impressed that this has entailed changes in behavior that are counter intuitive. I feel privileged to have seen this transformation. One of the joys of interspecies relationships is that they highlight very real changes from the norm. Now that I have ceased to bother this sweet couple, they sleep peacefully, Mercedes draped over Fivespot’s neck.