The rabbit psyche is mysterious, sometimes paradoxical. These deeply emotional creatures crave the companionship of their own kind. They form bonds so powerful that loss of a partner can cause depression and illness. Such devotion is far from apparent at first meetings, which may be marked by aggressive behavior. Two weeks later, these rabbits are inseparable, grooming and cuddling each other for hours at a time. The challenge to humans is how to guide them safely to a happy ending.

All rabbits to be matched are spayed/neutered. All are healthy, have good appetites and enjoy hay, so the digestive system will keep working during the match. Ideally, the rabbits are allowed to meet on a trial basis before a commitment to adopt is made. Introductions start with a 15-30 minute car ride. Introductions take place away from the home rabbit’s territory. The match is done slowly and carefully, building on positive bunny body language. The rabbits are supervised until bonding is complete.

When to Try Harder 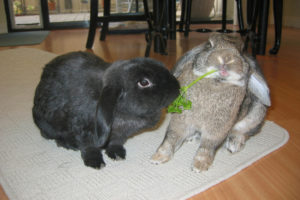 The bonding process assumes that the two or more individual rabbits have potentially compatible personalities, if given time to adjust to one another. Unfortunately, however intimately you may live with one or all of the rabbits being matched, it is not easy to predict the sum of these personalities coming together. It is possible to give up too soon on a match, but also to go too far, into a cycle of hostile behavior. Here are some suggestions for recovering a difficult match.

Know bunny body language, and know what behavior is helpful to the match and what is not. Positive behavior in the beginning stage may not involve contact with the other rabbit but occur in his or her presence. It includes all relaxed behavior: resting quietly, stretching out, flopping, happy mouthmovements and purring. Grooming, eating and drinking are positive, even if the o ther rabbit is not (continued) participating. Mounting the other rabbit is positive, unless the other rabbit has an extreme reaction to it (squealing or attacking). Generally, mounting means “I want you.” This is a good thing.

Watch for aggressive behaviors: tail up, ears back, growling, boxing, circling, chasing and biting. If one of these behavior occurs several times in a row; if neither rabbit backs down; if it leads to further aggressive behaviors, it should be interrupted. A spray of water, aimed at the rabbits’ heads, may interrupt a fight about to happen but has no effect once anger is aroused. If a fight advances to a clench, use a towel to separate the rabbits. Or, pour water from a water bowl on them. Using your hands is asking for a skin-breaking bite. Take a break and revise your strategy. To accomplish the match, you must prevent the fight from happening in the first place.

The more difficult the match, the more important the space/environment. I start the match in a medium sized, busy area, such as a play pen in my living room or my blocked off hallway. I add some stuff for the bunnies to jump on or over or to run around, I but avoid dead ends or places I can’t get to-no cages or carriers with only one entrance. These may lead to confrontation or entrapment. Add at least two litter boxes and lots of hay. Now I have my space, but only if it works for the rabbits I am matching. If doesn’t work, I experiment with other rooms in my home or different pens-larger or smaller-next to a window or door to the outside. The buns may go off to visit a friend, or we may have a slumber party right here.

After a car ride, I put Heidi and Flynn in the pen I’ve set up. Heidi chases Flynn and boxes him. Flynn runs away. He learns how to evade her. She trees him on top of a house, rears up and boxes him. We’ve come to an impasse. While it’s good Flynn is backing down instead of fighting back, he is becoming fearful. I don’t want this behavior to become a habit.

Heidi and Flynn need to be more inhibited but also more relaxed. I put two chairs side by side in front of the TV. One for me, one for Heidi and Flynn. I pet Heidi and she sinks into bliss. Flynn sits motionless next to her. Heidi curves her body around Flynn and smiles. She gets up and flops, bumping against him. She gets up again and curls herself around him the other way. She seems oblivious to Flynn’s tension. He is still recovering from being chased. The match is not over but the behavior is turned around.

Stick with What Works

The two errors I see in matches are not leaving an environment that isn’t working; and not sticking long enough with one that is. How do you know when to continue on? Positive body language. Does that mean Heidi and Flynn will keep dating sitting on furniture? Yes, absolutely. The next day I pull two chairs together, add a litterbox, hay and water, put a pen around the edges so they won’t jump off. I bring the chairs over to my desk while I write. We may as well be comfortable, because the “sticking with it” phase can last a week or more, depending on how long the sessions are.

Do not underestimate your participation in a rabbit match. Your job is to observe body language, respond to warning signs before a fight breaks out and intervene quickly if it does. If you are calm, your presence inhibits the rabbits from fighting and tells them this is a friendly warren. I sometimes sleep on the floor with bonding bunnies. If you’re not calm, take a deep-breathing break. You may find reassurance in “Introducing Rabbits,” a video that shows the progress of several actual introductions, in which rabbits who were chasing and lunging on Day 1 are cuddling on Day 7, or Day 37.

The More the Merrier?

Will adding a third (or fourth) bunny help a rocky relationship? We have found it does, if the added rabbit is the right individual. Ideally the peacemaker would be a calm adult rabbit who has been with other rabbits. This rabbit may set an example, and/or deflect the intensity between two conflicting spirits.

Sometimes bonded rabbits break out in a fight after years of happy companionship. We don’t always know the cause, but suspects are: new rabbit arriving in the household; trip to vet or other incident where rabbits are separated and/or pick up a strange smell; a health problem that makes the sick bunny irritable or the healthy one anxious. Once any health problems are addressed by your veterinarian, go back to bonding basics. To mask a strange smell, dab both bunnies with a scent such as vanilla.

If written material on bonding doesn’t cover your particular scenario, get a one-on-one consultation. If you are near an HRS foster home, volunteers can advise you on a match-making. Email is another way to contact experienced rabbit match-makers for advice and moral support.

When to Give Up?

Some matches are less likely to succeed than others. When one rabbit or both are teenagers (known for competitiveness and volatility), you may want to take a 3-6 month break before trying again. When one rabbit bullies the other in a variety of environments to the point the meek rabbit can’t eat, drink or move freely, it’s time to consider a long vacation. If despite your vigilance, a rabbit receives multiple bite wounds requiring stitches, call off the match. Perhaps some rabbits are by nature asocial, antisocial, or even mildly autistic, and simply cannot master the social niceties of rabbit/rabbit relationships. Certainly there are humans who are happiest in the society of species other than their own. Guinea pigs and rabbits generally get along quite well, with little or no introductory finagling needed. Cats, birds, and gentle dogs can provide companionship. Rabbits who cannot be trusted together may enjoy living in side-by-side enclosures. Such rabbits may lie next to each other, much like a bonded pair except for the wire between them.