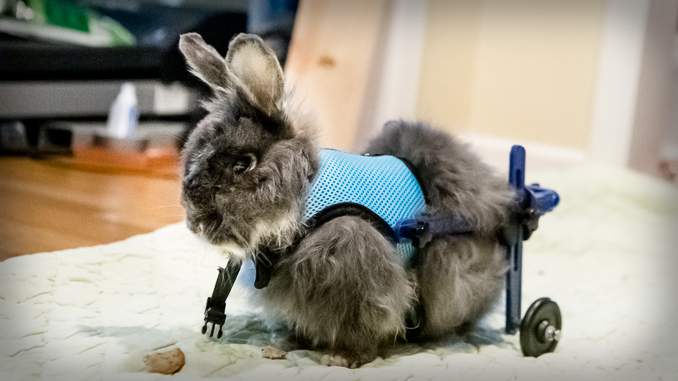 Confusion exists in people’s minds when dealing with crippled, deformed, or less than “perfect” animals. Is the suffering on the part of the animal or is it in the eyes of the viewer? I am privileged to have the insight of a very dear human friend who has multiple sclerosis and can say in human language that disability does not automatically remove one’s reason to be alive. Having known Lyndy Alston, I was unwilling to conclude, when my rabbit Phoebe became paraplegic, that her life must be ended. Yet, I felt compelled to keep this wonderful animal from public view-the disapproving, long, sad faces and “Oooooh! Poor thing! Is it really worth it?”

Is what worth it? My time? Her life? I usually remained silent.

“People act like I’m a ghoul,” I told Lyndy, “for not putting this animal out of her misery.”

Lyndy laughed, “Some people would like to put me out of my `misery,’ too.”

Appalled by such an idea, I was reminded that much of the suffering of a “handicapped” person is imposed by other people. Lyndy told me of a time when she was tooling down the street in her motorized wheelchair enjoying a drizzly day. But her pleasure was not perceived by an onlooker, who wondered aloud, “Why did they let her out on a day like this?”

Misery cannot be assumed. If you are facing the decision of prolonging or ending a life that you’re not sure offers more pleasure than pain, here are the guidelines that we use:

Appetite: Does she still like to eat?
Affection: Does she exchange affection with you or any other companion?
Attitude: Is she interested? Does she like to watch, sniff, and listen to the things going on around her? Does she still show pride and try to groom herself?

If you can answer yes to these questions most of the time but still doubt your rabbit’s quality of life, think quantitatively. Do the good days (when you answer yes) outnumber the bad days? You may find that you will appreciate the good days with a new awareness.

When you keep an invalid rabbit, people will think you’re a little crazy, a “bleeding heart.” So, for all the effort, what’s in it for the human caregiver? Invariably these animals give far more than they take.

House Rabbit Society fosterer Amy Shapiro rescued a partially paralyzed rabbit who required nursing care. When he died six months later, I reminded Amy that she had given him six months of happiness.

“No,” Amy corrected. “He gave me six months of happiness.”

My husband, Bob, was greatly bolstered by the courage and cheerful attitude he saw in our first paraplegic rabbit, Scooter. He has met few human models of strength with as much to give.

Beth Woolbright saw Patrick’s persistent willfulness to live, even with his degenerative illness. Her willingness to care for him often meant dashing home from work at lunchtime to tend to him, and sometimes taking him to work with her. But what she remembers most about the period are the Saturday afternoons sitting together in the clover. Those Saturday afternoons could have been spent in less important ways and long forgotten.

The Year of Living Joyfully

Our last year with Phoebe was physically exhausting. Our foster home had topped out at 82 rabbits, all with housing, feeding, and exercise needs. Several rabbits were chronically ill, and Phoebe needed around-the-clock nursing care. There were antibiotics, subcutaneous fluids, syringe feedings, and bandage and diaper changes. Yet, her bright eyes and perkiness tapped our reserve energy. We didn’t have to guess what was right for her. We could simply ask her face-to-face. She replied with hot, wet kisses.

hat was a wonderful year. As we counted the number of good days, each became a celebration. And because we were celebrating, we enjoyed our human activities all the more. Our lifestyles were adjusted to fit Phoebe’s feeding schedule, but recreation was wedged in here and there. At times it was a must to go out for a relaxing dinner-to be waited on ourselves. Or we’d rush to a late movie after all the work was done. We attended art exhibits, saw a few plays, and invited friends over for an evening.

I don’t remember the hardship. I remember only the joy.