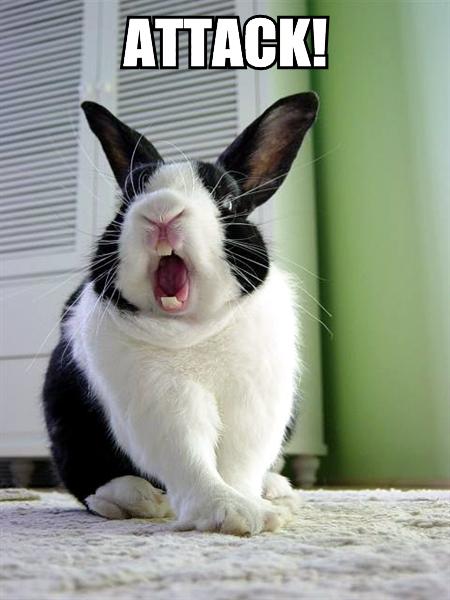 So you want a perfect animal. One who greets you at the door, who licks your hand, who sits on your lap while you watch TV, and who is intelligent enough to play games. And all these qualities you want in a rabbit. Rabbits do have these traits, but it’s very unlikely that you will get them all in one rabbit. If you want them all, you will need to have several rabbits – a quiet, docile one for your lap, a nosy, assertive one for game-playing, a spirited, independent one for watching. Together, you can have everything you want. Most people, however, are unwilling to add several rabbits to the household at one time, and the choice is either-or.

Enter the Aggressive Rabbit
My own choices include a surprising personality type – the aggressive rabbit, the one who growls, attacks, and even bites. No, I don’t enjoy getting bitten, but aggression in a rabbit is only a pattern of responses to a stimulus and a misdirection of energy. We can either change the stimulus or redirect the energy. When aggression is channeled into affection, the bite becomes a lick. Some of my most affectionate rabbits are converted “biters.” If you happen to have an aggressive rabbit, don’t despair You have the opportunity to build something worthwhile. You can have something more than a stuffed toy. You can have a real companion.

Winning Trust
Aggressive rabbits do require more careful handling. You will need to avoid negative stimuli, or situations that you know will provoke anger. During the trust-building stage you will see your rabbit pausing to make evaluations. Parts of your body may be judged separately from the rest of yourself. Is that hand approaching as a threat or a giver of rewards? Is that an alien rabhit intruding or just the white socks on your feet? Attack now; think later just in case. Time and positive reinforcement will help her reevaluate in your favor.

This type of animal needs greater freedom and is usually the quickest at litterbox training. They’re the geniuses of rabbit society. They can entertain themselves and think of more mischief to get into. You won’t find them under your bed, but on top of your bed. You can’t chase, and seldom can you lift (willingly) this kind of rabbit. They come to you on their own terms.

Your house will be full of compromises, but at least it won’t be dull. Aggressive rabbits often make good travelers, because they are not afraid of new adventures. They’re not afraid of cats, dogs or the vet. They will chew on stethoscopes and snoop into pockets. They will try your patience and entertain you at the same time. Eventually, their boorishness becomes endearing.

What Went Right
If you were to meet my house rabbit Phoebe, a spunky English spot, you would be captivated by her charm. She would tuck her head under your hand and demand that you pet her. She would invite you down to the floor where she could lick your face. You would want to take her home. Yet, 5 1/2 years ago you wouldn’t have had her. She would have intimidated you with bites, kicks and scratches. Phoebe was my choice because she looked like my first rabbit, Herman, but it soon became apparent that she was no reincarnation. I picked the wrong rabbit, I thought. This one doesn’t like me and won’t even let me pet her. After my son, Bill, offered to take her, I decided to live with my “mistake.” The rest of the story is one of learning to respect an animal simply for being who she is. At six years old Phoebe is without peer. How can this be the same Phoebe who was identifed in the House Rabbit Handbook as “mean and ornery”? In looking back, we realize that her high-spirited personality is still the same. It was our our relationship that changed.