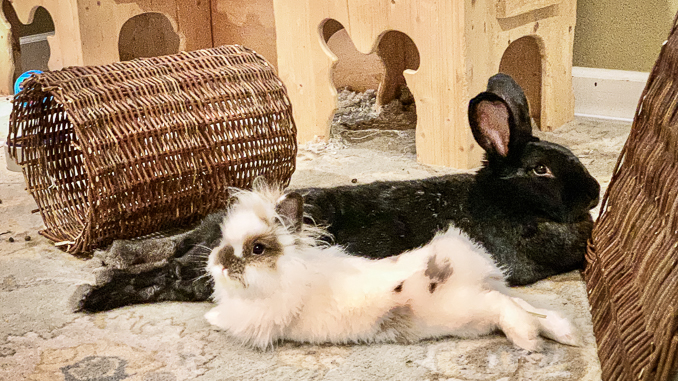 Because the notion of rabbits as indoor companions is still relatively new, many adopters are first-time house-rabbit people. Not surprisingly, most prefer to start with just one rabbit. If all goes well, they will find themselves thinking of adopting a second rabbit, our experience as HRS fosterers is that the vast majority of rabbits crave the companionship of at least one of their own kind. We offer the following to help you decide whether a multi-rabbit household is right for you.

The two most important factors in introductions are reproductive status and territory. Two unaltered rabbits, in any combination, are likely to either fight or breed, or both. “Nature” programs on t.v. always describe the territorial habits of wild animals. It is easy to forget that as primates, we humans are also part of the animal world. Do you have a lock on your door? a fence around your yard? a “vanity plate” on your car? How would you feel if one evening, as you’re sitting by the fire rereading back issues of HRJ, your rabbit hopped into the room with a strange human in tow? Would you immediately welcome this person as a permanent member of your family, or would you call 911?

Let’s try introducing that strange new human again. You attend a seminar on rabbit behavior at the SPCA. The room is full of people who share your interests. At the break, you find yourself chatting with an extremely pleasant human. You exchange phone numbers and agree to meet for coffee later in the week. Sound more promising this way?

The difference between a public meeting room and your den is that the former is neutral territory. For your rabbit, neutral territory means anywhere she has never spent time. Ideally this space is also small (about six feet square), with an easily cleaned floor and no underneath or behind spaces accessible to rabbits but not humans. If your rabbit inhabits every nook and cranny of your home, use your car as neutral territory. Better still, find a sympathetic friend and hold the get-acquainted sessions there. You should also have a cage or some kind of contained, private space for each rabbit. To avoid the expense of an extra cage, try to borrow one. Your local shelter or rescue group may have a spare. The larger travel kennels (for medium to large dogs) may be used. A small bathroom or a hallway barricaded with baby-gates can serve as either a neutral territory or a second area for the newcomer.

Equip yourself with a water sprayer, a large quantity of patience and calmness, and if at all possible the help of an experienced rabbit-person, on the scene or at least available for phone consults. Your local shelter may have a rabbit-person who can help, or be able to put you in touch with an HRS educator.

Who: Many people assume that in choosing a companion for their rabbit, they should look for one who is similar in size or breed. The rabbits tell us otherwise. Matches between dwarf- and jumbo-size rabbits are quite common. Don’t be surprised if the feisty little one dominates her easygoing big friend.

Like territory, hormones elevate the tension level between rabbits. Even when you eliminate every possible source of hostility, you are still likely to see some aggressive behavior during the introduction. By introducing altered rabbits in neutral territory, you are taking two giant steps toward your goal. Territorial marking is greatly reduced when both rabbits are fixed. False pregnanciesÃstressful for all partiesÃare less likely. And the possibility of a real pregnancyÃand the resulting increase in the number of rabbits killed in sheltersÃis avoided.

When we first began matching rabbits, conventional wisdom held that males, even if neutered, cannot live together. We have cared for a great many male pairs, as well as larger groups with multiple males, and found that males can form close friendships. Adopt a compatible spayed female for your male if possible; but if you find yourself with two males, don’t despair.

Age plays a minor role in determining compatibility. Don’t assume that your 2-year-old female will feel maternal toward a baby (under 3 months old). Adults generally prefer other adults or teenagers, and baby bunnies do best with another youngster.

Temperament refers to your rabbit’s sense of herself in relation to others, and specifically to other rabbits. She may be bossy and confident, bossy and insecure, timid, mellow, asocial, anti-social, terrified, or some combination of these traits. A common experience for fosterers is a stunned, embarrassed human who has brought his rabbit to meet potential companions. “But she’s such a sweetheart with us!” he cries in dismay as Ms. Creampuff grabs another mouthful of fur from her new “friend.”

Where: The best place to find a rabbit is your local animal shelter or rescue group. Many of these will allow you to bring your rabbit with you, so she can meet several prospective pals on neutral territory.

At last, you’re ready. You’ve set up the basicsÃone cage/area per rabbit, one small, easy-to-clean, accessible neutral territory, a plant-sprayer filled with water. You pack your bunny into her carrier, and the two of you head for the foster home or shelter.

The rabbits are taken from their carriers at the same time. They spend the first five minutes investigating the room, ignoring each other. Tuffy, an outgoing, charmingly obnoxious, recently spayed teenage girl, charges after Sweetpea, a sensitive neutered adult male. Sweetpea runs away. Tuffy catches up with Sweetpea, mounts him, and doesn’t let him move. Sweetpea stays where he is, eyes bulging, pulse racing. This bodes well. A rough translation of their conversation: Tuffy says, “I’m the biggest baddest bun in the universe.” Sweetpea replies, “Yes o great one, and I am but a speck of dust in the cosmic eye.” Tuffy: “Well, as long as we’re clear on that.” “Absolutely. Unquestionably. Crystal clear,” whispers Sweetpea. Although there’s been a lot of commotion and some fur flying, these two share a common view of their respective positions in the Great Scheme of Things.

After about 20 minutes, Tuffy and Sweetpea are returned to their respective havens. These temporary quarters can be set up in a variety of ways, depending on your living space. If you have two cages, put them next to each other, so the rabbits become accustomed to each other’s sight, scent, and presence. Repeat the 20-minute sessions daily. Tuffy will continue to assert her supremacy through such actions as chasing, mounting, biting, and lunging. Injuries requiring medical attention may occur. One of the most difficult aspects for the attending humans is knowing when and how to intervene. Intervention is a judgment call on your part. It’s often difficult to separate our emotional responses from our more objective reading of the situation, especially if your resident rabbit is the one being pushed around. If you feel Tuffy is becoming dangerously aggressive, you have several options. Distract the rabbits by making a commotion. Stamp your feet, shout, drop a trash-can lid on the floor. The startled rabbits will run for cover. Use a plant sprayer to spray one or both rabbits in the face. Not only will they stop fighting, but also they will take a face-washing break. There’s no law requiring neutral-territory sessions to be exactly 20 minutes. Play it by ear.

Some rabbits respond well to human involvement. They may calm down if you stroke them. Some rabbits have a “lick response” to being groomed or scratched on the back and can be tricked into grooming the other rabbit. Usually within a few days or weeks, you will see signs of friendship. The most easily recognizable of these is grooming. When you see this, it’s time to try placing the rabbits in non-neutral territory. The introductory phase may need to be repeated in this home territory.

In Instant-Hostility encounters, the initial investigation of the room is either absent or brief. Within a few minutes, the two are engaged in serious combat. They both grab hold of the other with their teeth and then kick the belly with their strong back legs. Neither backs down. Both want to be top bunny. By the time they work out their positions, one or both may be seriously injured. However, as our feature story demonstrates, difficult introductions can lead to harmony. The steps required are also described in detail by HRS Education Director, Margo DeMello in HRJ vol. 2, #5.

Love at First Sight is unmistakable. These soulmates greet each other as old friends, grooming and snuggling and may kick up their heels in a joyful dance. A slight variation occurs when one rabbit experiences love at first sight, and the other tolerates affection. In time their feelings will be mutual, but the initial encounter may be somewhat muted.