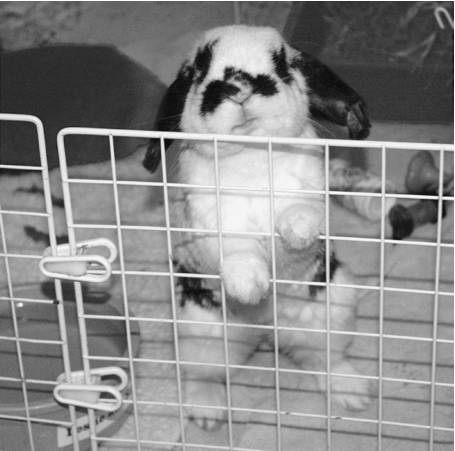 Our rescue work often requires us to socialize rabbits for the purpose of making them more appealing to prospective adopters. Most of the time, we are dealing with aloof rabbits, who withdraw from human contact and sometimes nip when picked up. Occasionally we take in a decidedly aggressive rabbit who does not withdraw but actually picks a fight with people, objects, or other animals.

My editoral, “To Love a Mean Rabbit,” addressed my fascination with these combative personalities in 1999. I didn’t have the opportunity to take in another truly “mean” one until 2005, when a quarrelsome black-and-white spotted lop entered HRS’s Rabbit Center in Richmond, CA. Though deceivingly cute in appearance, Sinbad soon earned the reputation of being the most vicious rabbit ever to enter the Rabbit Center’s doors. Volunteers wore heavy whenever he had to be moved or handled.

My husband, Bob, and I brought the “unadoptable” Sinbad home to live in our sanctuary. My first get-acquainted attempt was sitting with him on the front porch. I wasn’t exactly with him. I had to stay on a bench and keep my feet off the floor lest he bite my ankles. When it was necessary to pick him up, we had to shield ourselves with jackets, gloves, and towels.

Sinbad did not allow us to reach into his pen for any reason whatsoever. I once made the mistake of trying to straighten his rug, only to find a pair of teeth clamped firmly into my wrist. I had to run for help with Sinbad dangling from my arm. From then on I used a long-handled “grabber,” a device for reaching hard-to-reach areas, in this case, anything within his biting radius.

We could drop in veggies and hay from the top of the pen and attach a water bottle on the outside. To change Sinbad’s pellet bowl, one of us had to give him a toy to attack at the far end of the pen, while the other did a quick exchange of pellets.

Mean rabbits are smart. They learn a routine quickly. “Training” Sinbad to exit his indoor pen to go outside for playtime was a matter of appealing to his assertive nature. Open a door and out he would dart through a fenced corridor that channeled him to his large predator-proof outdoor run.

Even the meanest rabbit has agreeable moments, though they’re not always obvious. Shortly after Sinbad moved in, the Wisconsin HRS chapter managers, George Flentke and Susan Smith, visited California. Entering our rabbit room, they came upon Sinbad leaning against the side of his pen. Susan took the cue and, talking sweetly, she put a finger through the pen and stroked the top of Sinbad’s head. Surprisingly he lowered his head in acceptance.

For the next few days, I watched for similar signals. Whenever I saw Sinbad leaning at the edge of his pen, I repeated Susan’s approach and got the same response: head down, teeth “purring.”

Bob took a more daring strategy. At Sinbad’s signal, Bob began singing to him and then slowly crawled into Sinbad’s pen. Sinbad was so astonished that he retreated to his litterbox. Bob kept his jacket on but removed the gloves (still singing) and started gently stroking Sinbad’s head. That was a major breakthrough. Provided that Sinbad chose the time and we followed the rules–nice voice (male or female) followed by petting, limited to his head–we could touch Sinbad, without his whirling around to bite us.

Bob and I alternated every other day with a brief talking/singing/petting session with Sinbad. We didn’t need to wear jackets for these sessions, since Sinbad’s teeth were engaged in purring, not biting.

I didn’t really notice the gradual changes over the next four years. He seemed happy, did lots of dances, and was usually in good health. Occasionally, we had to pick him up to take his temperature or apply eye drops.  One day, I realized that neither of us had worn jackets or used our “Sinbad” gloves for a couple of years.

By the middle of 2010, Sinbad seemed perfectly content with his life, yet it was solitary. We had never considered him a suitable partner for another rabbit, but he might be ready now. I set up a neutral territory—the same front porch where he had bitten my ankles so long ago. After a leisurely introduction, he was bonded with Leslie, a plump, middle-aged lady who had outlived three partners. Amazingly, Leslie is the queen.  Sinbad defers to her in choice of treats and places to sit. If she wants to be groomed, he’s there to oblige her. And he’s ecstatic when she grooms him back.

After a year of wedded bliss, Sinbad developed an ear infection. I took him to see Dr. Carolynn Harvey at the Rabbit Center.  Her volunteer assistants, Karen Johanson and Terry Linscott, braced themselves for the ferocious rabbit they had known in the past. Dr. Harvey asked if they needed the gloves, which were still clipped on the wall. I said no.

Sinbad was successfully maneuvered through the positioning and repositioning of a thorough physical exam. When he was set on the floor to observe his balance, he immediately pranced off down the hall and disappeared around the corner.  We all laughed, and Terry carried Sinbad back in her arms. “There was a time,” she said, “that I wouldn’t have dared to do this.”

I’ve lived with many mean rabbits and have loved them all. It wasn’t necessary to convert Sinbad; he would have a home with us anyway. But his socialization with us has made it possible for him to live with Leslie, and that is his greatest reward.

I don’t have a formula for mellowing out an aggressive rabbit. We followed Amy Espie’s fundamental called “setting up for success.” We avoided annoying situations that would provoke Sinbad to attack, and he eventually eliminated that response from his repertoire. Instead we gave him positive things to think about and a consistent routine so that he always knew what to expect.

Did Sinbad’s socialization subdue his vigorous spirit? He gives us his answer in his morning leaps and a springy style of ascending the back stairs at night. He has a higher bounce than anybody else.