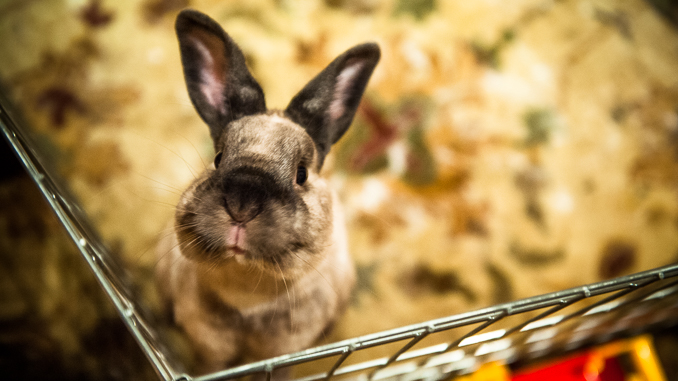 People who haven’t lived with rabbits often ask those who do if rabbits make “good pets,” and if so, if they are more like dogs or cats. Most house rabbit people don’t quite know how to respond to these questions, not only because we have transcended such mundane matters in our own relationships with rabbits, but also because the chauvinistic nature of the questions themselves makes us feel uncomfortable.

It seems that for most people, an animal is perceived as a “good pet” if she shows affection in ways human beings can understand without much effort (e.g., lapsitting or coming when called), if she participates in games humans easily comprehend (“catch,” “fetch,” or “chase the string”), or if she makes an obvious effort to communicate vocally (barking to be let in or out, mewing for supper). People usually seem fairly sure these qualities cannot be expected in a rabbit, and hence, that rabbits would not make “good pets.” Alternatively, some people expect such traits in all rabbits and may be disappointed in one who is unwilling or unable to comply with their expectations.

The second question, “Are rabbits more like cats or dogs?” is a natural to follow the first. My usual response is, “Are people more like fish or cockatoos?” After all, rabbits are, first and foremost, like rabbits, and the only way to find out what they are like is to live with one or more. You’ll find that rabbits share a few characteristics with dogs, a few with cats, and a few with humans. They probably even share a few with fish and cockatoos. But mostly they’re like rabbits, and learning what rabbits are like is part of the joy of living with them. The fact that this question, like the “good pets” one, is asked at all makes clear the human position that in order to be considered of value in our world, other species must conform to our notions of what is “good.”

The other day I sat on the bedroom floor returning phone calls. Megan, our overweight and very aggressive New Zealand (who, paradoxically, adores being petted), gallumphed up, grabbed the notebook out of my hand, bit a hole out of the corner, and stomped on it. She lunged at my hand as I retrieved the notebook, grazing it with her teeth, then shoved my leg and settled down against me. I grinned at her and stroked her head (as I had just been commanded to do). The caller was telling me about her rabbit, who wouldn’t let her pick him up, who lunged and bit when approached, and who seemed to “hate” the family. The family dog, on the other hand, loved the children and played with them all the time; they were disappointed in the rabbit and wanted me to find him a new home.

I looked at Megan, her head pressed to the floor, eyes closed, ears relaxed, fat body spread out behind her. No, she doesn’t act like a dog. If a dog lunged and bit you’d be justified in getting worried, because human-canine relations are completely different from those between humans and rabbits. But Megan and the caller’s rabbit both act very much like rabbits, each in their own ways. The difference, I realized, is that I accept Megan’s aggression (and even revel in it!), while the caller seemed to resent her rabbit because his behavior did not conform to her idea of “a good pet.”

The implication that some animals (usually dogs and cats) are simply “better pets” than others rests on the assumption that in order to fit into our lives, all animals should resemble those to whom we are already accustomed. Such an assumption removes the responsibility for the relationship from the human being and places it solely on the animal. Although the rabbit is expected to comply with human expectations, all too often the human being never even considers complying with hers. But in almost every case, a wonderful new relationship is forged when you begin complying with the expectations of a rabbit. Megan accosts me and I react in a way she finds appropriate, even though to me it seems odd at first. After a few weeks, Megan trusts me, likes me, and has me pegged as savvy – but she still nips my foot if I venture too near her parsley!

Do we expect too much or not enough?

I hesitate to tell people not to expect their rabbits to jump up on their legs, leap into their laps, or lick their hands, because some rabbits do these things. But too many people expect such behaviors and express disappointment when their rabbits do not comply. None of the rabbits I live with currently do any of these dog-like things, but over the years I have discovered a range of interesting activities they engage in that the dogs and cats in our family never even thought about. Megan may not jump into my lap, and she’s more likely to bite my hand than lick it, but she terrorizes the cats daily, manages to growl in annoyance while simultaneously cavorting with joy across the floor, and makes demands more effectively than any of our noisier critters.

No small part of the problem lies in our use of the term “pet.” After all, a pet is “one who is petted,” implying passivity and ownership. We seldom call other human beings “pets,” and most people would consider it an insult if we did. By using the term to describe animals we are diminishing their importance in our lives. We are denying their right to individuality and a lifestyle that may or may not include allowing us to fawn over them. On the other hand, a rabbit who is a companion is one who – like our human friends – is encouraged to develop the personality nature gave her and is appreciated for who she is.

So what should we say when people ask if rabbits are “good pets”? I don’t want to assure folks that they are, because I know the implications of the phrase. On the other hand, if I hesitate and explain, they’ll think I’m making excuses. They may be unable to see what is special about rabbits. Perhaps those of us who know, through experience, what rabbits are like should decline to answer these questions at all. Instead explain that rabbits make wonderful, exciting, intelligent companions for wonderful, exciting, intelligent people. After all, living up to the expectations of a rabbit like Megan or Trixie or Phoebe or Bandit  takes a lot of work! Their type of person is adventurous, charmed by evidence of spunk and vigor, and willing to learn a new language, a new lifestyle, and a new code of behavior. Those who live by stereotyping, pigeon-holing, or typecasting need not apply.