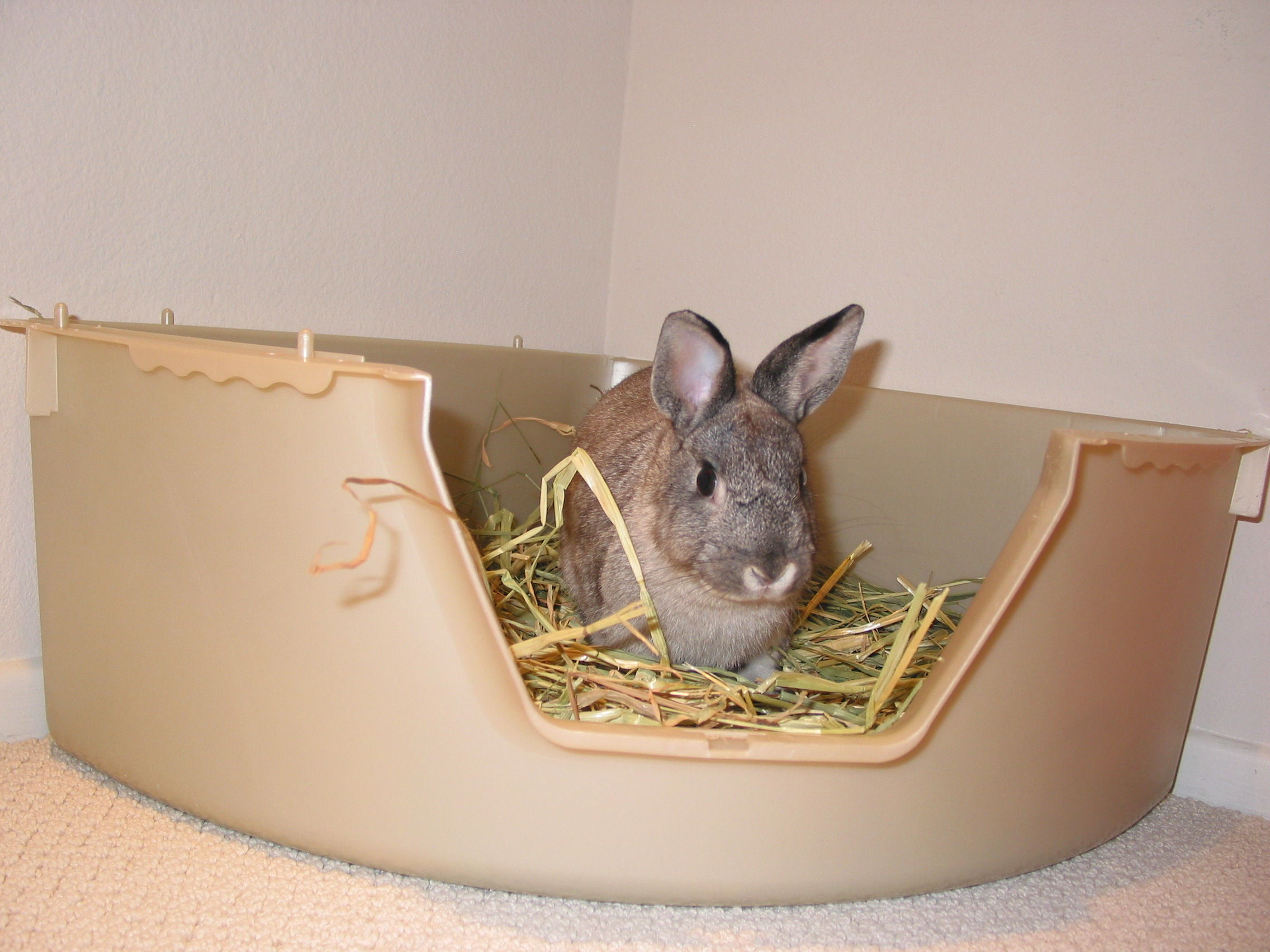 Does age make a difference?

Does spaying/neutering make a difference?

What types of litter should I use?

What kinds of cages work best?

What if my cage is on legs or has a door that opens on top so the bunny can’t get into it on his own?

What if my cage is too small for a litter box or I don’t use a cage?

Can the rabbit have a running space?

How many litter boxes?

Kicking litter out of the box

Urinating over the edge of the litter box

What to do if your rabbit insists on using another spot?

What are the most common litter training mistakes?

By nature, rabbits choose one or a few places (usually corners) to deposit their urine and most of their poops. Urine-training involves little more than putting a litter box where the rabbit chooses to go. Poop-training requires only that you give them a place they know will not be invaded by others. Here are some suggestions to help you to train your rabbit to use the litter box.

Does age make a difference?

Older rabbits are easier to train than younger rabbits, especially babies. A rabbit’s attention span and knack for learning increases as they grow up. If you have a baby, stick with it! And if you are deciding whether to adopt an older rabbit, or litter train your older rabbit, go for it!

Does spaying/neutering make a difference?

Yes! Spay or neuter is the most important part of litter box training a rabbit. When rabbits reach the age of 4-6 months, their hormones become active and they usually begin marking their territory. By spaying or neutering your rabbit, he will be much more likely to use his litter box (as well as much healthier and happier).

What types of litter should I use?

It depends on what’s available in your area and your rabbit. Keep in mind the following as you choose your litter:

Place a handful of hay in each box. It is helpful to put several layers of newspaper or litter under the hay, to absorb urine so that your rabbit is not standing in the urine. Most newspapers today are using soy-based ink, which is safe for your rabbit, but check with your local newspaper to make sure first. Change the hay frequently (daily), since your rabbit will be eating it. This method helps encourage good litter habits as well as encourages hay consumption, since rabbits often eat and use the litter box at the same time.

Safe litters (all compostable!) include:

Clean litter boxes often, to encourage your rabbit to use them. Use white vinegar to rinse boxes out–for tough stains, let vinegar soak in pans. Clean up accidents outside of the cage with white vinegar or club soda. If the urine has already dried, you can try a pet urine enzyme cleaner like Nature’s Miracle to remove the stain and odor.

To dispose of organic litters, they can be used as mulch, composted at home, or added to municipal green waste collection. Rabbit poops can be directly applied to plants as fertilizer.

What kinds of cages work best?

What if my cage is on legs or has a door that opens on top so the bunny can’t get into it on his own?

If it is on legs, build a ramp or stairs, or pile boxes to make steps–anything so he can come and go on his own.

If the door is on top, put a small stool or box inside to help him get out, a board or piece of rug to help him walk to the edge of the enclosure, and a ramp, stairs, stool, or boxes to help him get down (and up again).

Consider replacing the enclosure with a puppy exercise pen, so the rabbit can come in and out on their own on ground-level.

What if my cage is too small for a litter box or I don’t use a cage?

If you don’t use an enclosure, give the bunny a particular area to call their own. Put a litter box wherever the bunny seems to prefer.

All rabbits will drop poops around their cage to mark it as their own. This is not a failure to be litter-trained. It is very important for your rabbit to identify the cage as their property so that when they leave the cage for the bigger world of your house, they will distinguish the family’s area from their own and avoid marking it. To encourage this, make the rabbit the king of their cage. Try not to force them in or out of it — coax them. Do not do things to their cage that they don’t like, or things to them that they don’t like while in the cage.

The trick to getting the rabbit to keep their poops in the cage is to give them ownership of their cage–respect the cage as theirs:

The same technique can be used if a rabbit doesn’t live in an enclosure, but in a particular part of a room. Mark the territory with a rug, tape, whatever, and don’t trespass over that.

Can the rabbit have a running space?

Even if your goal is to let your rabbit have full run of the house, we recommend starting small. Start with an enclosure and a small running space, and when your rabbit is well litter box trained in that space, gradually give them more space. If you overwhelm them with too much freedom before they’re ready, they will forget where their box is and will lose their good habits.

Start with a box in the enclosure, and one or more boxes in the rabbit’s running space. If she urinates in a corner of the enclosure not containing the box, move the box to that corner until she gets it right. Don’t worry if your bunny curls up in his litter box–this is natural.

Once she’s using the box in the enclosure, open her door and allow her into her running space. Watch her go in and out on her own. If she heads to a corner where there’s no box, or lifts up her tail in the characteristic fashion, cry “no” in a single, sharp burst of sound. Gently herd her back to her enclosure and her litter box, or into one of the boxes in her room.

Be careful – you don’t want to make the enclosure or the litter box seem like punishment. A handful of hay in the box makes it a more welcoming place. After she first uses the box, praise her and give her her favorite treat.

Once she uses the box in her room a couple of times, her habits will be on their way to forming. As she gets better trained in her first room, you can increase her space. Don’t hurry this process. And if the area becomes very big, or includes a second floor, be sure to include more litter boxes, so as not to confuse her.

As she becomes more confident and uses fewer boxes, you can start to remove some of her early “training” boxes.

Get your rabbit into a daily routine and try not to vary it. Rabbits are very habitual and once a routine is established, they usually prefer to stick with it.

How many litter boxes?

The more, the merrier, especially if your rabbit is a bit of a slow learner, or is especially obstinate about where she wants her box(es) to go. As her habits improve, you can decrease the number of litter boxes.

Kicking litter out of the box

Some rabbits love to kick their litter out of the box. You can get a covered litter box (with a hood), experimenting with different litters, or a sifting cat pan with litter under the sifting tray and hay on top, to help solve this problem.

Urinating over the edge of the litter box

Rabbits often back up in the litter box and the urine goes over the edge. Possible solutions:

What to do if your rabbit insists on using another spot?

Compromise. If your rabbit continually urinates in a spot where there is no litter box, put their box where they will use it, even if it means rearranging their cage or moving a table in the living room. It is much easier to oblige them than to try to work against a determined bunny!

What are the most common litter training mistakes?

What should I do if my rabbit starts dribbling all over her cage instead of using the litter box?

Dribbles usually indicate a bladder infection. Get your bunny to a rabbit-veterinarian who will probably put her on an antibiotic. If the dribbling stops, you know that that was the problem. (Watch out for antibiotics given by veterinarians not familiar with rabbits as companion animals!)

If the “dribbles” are more than dribbles, or if the antibiotic doesn’t stop the problem, consider any factors that may be making your bunny feel insecure (new pet, house guests, change in location of cage, etc.), any of which can cause a bunny to mark her cage more enthusiastically (similar to someone having a dispute with a neighbor about the location of a fence setting up a flag at the property boundary marker).

Why does my rabbit urinate or leave poops right beside the litter box?

The three most common things that are related to poor litter habits (especially if the bun had been using the litter box in the past) are: