What we think of as a rabbit’s ear is only a part of their hearing apparatus, and it is the simplest part at that. Like the human ear, rabbits’ ears are also divided into three sections.

The visible ear is the rotating, signal-capture portion of the outer ear called the pinna (Figure 1). It is rarely the smallest part of the hearing apparatus, though. Rabbit ears range from the kitten-like ears of a Netherland dwarf to the ridiculously long ears of an English lop, accounting for up to 12% of the rabbit’s surface area. In up-eared (some would say “normal”) rabbits, each ear can rotate nearly 270º to allow detection of the source of a sound, or even to monitor two sounds at once.

The pinna also has a relatively large blood supply, and the extensive network of blood vessels provides a lot of surface area for heat exchange. When he gets overheated, a rabbit’s ear vessels will swell with blood. This is a major part of his temperature-control system. As blood circulates through the ear, heat is given off so that the blood returning to the rest of the body is cooler than when it entered. A damp cloth rubbed on your rabbit’s ears on a hot day, or during a high fever, can aid this process by adding evaporative cooling. When a rabbit is in a cold environment and is trying to conserve body heat, his ear vessels will constrict to reduce blood flow and thus reduce the amount of heat loss. Your vet may have trouble getting a blood sample from your bun on a cold day or in a cold room, because ear vessels will be smaller than usual (then again, his blood pressure may be up from the stress of a vet visit…).

The rest of the outer ear is composed of a bent canal that goes vertically and then almost horizontally to lead to the eardrum. This portion of the ear is prone to buildup of earwax and debris, which may then become a breeding ground for infection. Many rabbits can deftly clean out any accumulation with a back toenail, but lops and infirm rabbits may need a bit of help. Since the ear canal has a bend, this can be done fairly safely. Your veterinarian can show you how.

The outer ear canal is also where you will find ear mites if they are present, although the mites, and the crusty skin that they cause, can extend up the pinna and even onto the back of the rabbit. Fortunately, your veterinarian can prescribe an effective treatment for ear mites and the skin will heal without your having to remove the crusty stuff inside the ears. 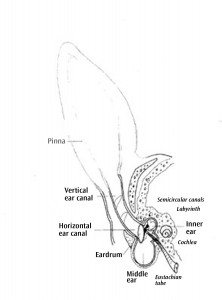 Moving roughly toward the center of the back of the rabbit’s skull, you next come to the middle ear. The middle ear is an air-filled cavity separated from the outer ear by the eardrum or tympanic membrane. Inside is a chain of small bones called the ossicles. The three ossicles- hammer, anvil and stirrup (see inset)- transfer the pressure of a sound wave from the eardrum to the fluid-filled inner ear. Since sound waves move more easily through air than through liquid, a lot of the energy of a wave could be lost at the junction between air (sound moving down the ear canal) and liquid (the medium of the inner ear where the sound wave will be interpreted). With the middle ear acting as an impedance-matching device, a majority of the energy of a sound wave moves on to the inner ear. In the case of a sound that is too loud, muscles attached to the ossicles can tense to decrease the proportion of the sound that is transferred and help to prevent damage to the inner ear.

Connecting the middle ear to the throat s a short, narrow passage called the eustachian tube (Figure 1). This passage provides a means for maintaining equal air pressure on both sides of the eardrum. Although normally closed off by a valve system, it also provides a possible route for infectious bacteria to enter the middle ear. A pus-producing infection in the middle ear (called otitis media), and a closed or plugged eustachian tube, can generate enough pressure (by pus buildup) that the eardrum ruptures. If you see pus in your rabbit’s ear, this may be what has happened, and it’s definitely time for that vet visit.

Our sound wave has now been transmitted to the fluid of the inner ear, which is called endolymph. The inner ear has two main parts: The cochlea, a spiral-shaped tube, processes the sound waves transmitted to it by the ossicles, before passing the information on to the brain. The vestibular apparatus senses the position of the head and any movement or motion it may be experiencing.

Inside, and running the length of the cochlea is a membrane (the basilar membrane, inset) that decreases in thickness and stiffness from one end to the other. This means that each section of the membrane has it’s own resonant frequency. On top of the basilar membrane is a cellular layer known as the organ of Corti, which is lined with hair cells – sensory cells topped with hair-like structures. When a sound wave reaches the portion of the basilar membrane with the same resonant frequency, its associated hair cells send nerve impulses to the brain to give a perception of the sound’s pitch. A very strong movement of the endolymph due to very loud noise may cause hair cells to die. This can cause partial deafness and may be why your bun ignores you when you call her name. More likely, though, is that she just has a different agenda.

The other part of the inner ear has nothing to do with hearing. It is called the labyrinth and it keeps track of the body’s position and movement. The labyrinth itself has two types of sensory devices. The saccule and the utricle make up the mac-ular organs which detect head position and linear motion. Microscopic calcium carbonate crystals sit atop tiny hairs on the surface of these organs. The weight of the crystals pushes, pulls on or bends the hairs, causing nerves at their base to send signals to the brain. The cumulative report from all of the hair cells lets your rabbit know if she is right side up, upside down or blissfully flopped on her side. A “righting reflex” helps her to keep her head in a normal upright position most of the time by signaling appropriate neck muscles to contract or relax.

The other type of sensory device in the labyrinth is a set of three semicircular canals. The semicircular canals detect angular motion, such as spinning in a circle or tipping the head. Each of the three semicircular canals is oriented along a different plane so that each is perpendicular to the other two (see figure inset). These canals are filled with endolymph, similar to the cochlea, and their inner surface is covered with hair cells. Turning the head to the side, or tipping the head to the side, forward or back, causes the endolymph to course through the particular canal that is on that plane. The movement of the endolymph bends the hair cells in the canal and the direction of their bend indicates the direction of movement. Spinning in a circle stimulates the lateral horizontal canal. During the spin, the head or the eyes or both drift slowly away from the direction of spin, then move quickly in the direction of spin. This is called horizontal nystagmus and is a normal sign of an effort to maintain the gaze on a fixed point that shifts during rotation. The posterior vertical canal senses the tipping of the head to the side, i.e., moving the ear towards the shoulder. The anterior vertical canal senses the tipping of the head forward and back. Similar corrections are made in the head and eyes for movements that stimulate these two canals.

When everything is working correctly, the signals from the labyrinth keep the rabbit oriented in his environment. A damaged or missing labyrinth, due to injury or disease, can send your rabbit into a spin-physically as well as figuratively. The muscles on the side of a damaged labyrinth relax and those on the opposite side of the head tense. The eyes move rapidly side to side (nystagmus), and the head and neck tend to twist or turn toward the damaged side. This is the same as the corrections in normal movement mentioned above, but there is no real movement, only perceived movement. We see this as rolling or circling in rabbits with ear infections or neurological diseases such as Encephalitozoon cuniculi.

As an example, damage to the right labyrinth, or pressure from an infection in the middle ear, will cause a rabbit to turn his head to the right or twist the right side down, depending on which canal receives the most stimulation. The signals to his brain (from the damaged labyrinth) tell him that he is or tilting to the left, so his righting reflex attempts to correct the misorientation by tilting to the right. Since the signals are false, he will hold his head tilted to the right or even roll completely over in a vain attempt to control the situation. You may also see nystagmal movement of his eyes as a result of this same mis-signal. Damage to both labyrinths at the same time will appear mostly as an erroneous signal from the vertical canals (which detect forward and back tilting of the head). The head is likely to droop and there may be a shifting of the eyes up and down (vertical nystagmus) as the rabbit attempts to ascertain when his head is in a normal position.

by Jana Rickel of Sound Diagnostics