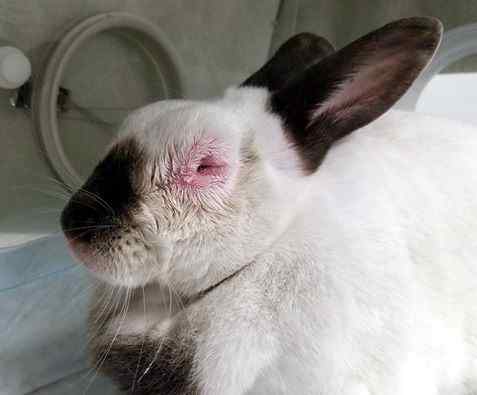 Myxomatosis is a deadly virus. Wild rabbits can carry Myxomatosis, but do not become sick. Myxomatosis is fatal to domestic (pet) rabbits with a 99% mortality rate, and there is no treatment and no vaccine in the USA. Symptoms include swollen eyelids, lips, and genitals, a high fever, lethargy, and progresses to difficulty breathing, and death, within 2 weeks. Myxomatosis is endemic to many coastal areas on the west coast of the USA.

Myxomatosis is a viral infection in rabbits caused by a member of the Poxvirus family. It is deadly to rabbits: the mortality rate has been reported at 99%. It is spread by vectors (mosquitoes and fleas) that have bitten an infected rabbit. Direct contact with an infected rabbit can also spread the disease.

How did Myxomatosis come to be?

The Myxomatosis virus was introduced into Australia in 1950 to reduce the population of wild rabbits. It got out of control and affected domestic rabbits and spread into other countries. Millions of rabbits have died from it. In the United States there have been an increasing number of cases over the years, especially in The San Francisco Bay Region.

How is Myxomatosis spread?

Mosquitoes, fleas, black flies, or fur mites bite a wild rabbit with Myxomatosis and then bite a domestic rabbit. Myxomatosis can also be spread by direct contact between infected rabbits, or indirect contact through handling a sick rabbit, then handling a healthy rabbit.

Where is Myxomatosis in North America?

Myxomatosis cases in pet rabbits are reported in the coastal areas of Oregon, California, Washington, and Baja California, Mexico, in the territory of the brush rabbit (Sylvilagus bachmani), which is a reservoir of this disease.

So far, cases have been reported June-October and January-February (no reported cases yet in November/December or March/April/May).

2021 was the first time we saw myxomatosis in San Jose. Before that it was mostly limited to the coast and mountains. The disease tends to have a seasonal component, starting mid to late summer and going through November.

There have been multiple detections (both clinical suspect and confirmed) of Myxomatosis throughout western Oregon in 2022:

House Rabbit Society is collecting reports of cases of Myxomatosis to add to this list.  If you are a vet with a patient with Myxomatosis, or a rabbit guardian whose rabbit has been diagnosed with Myxomatosis, please email us at [email protected] to have the case added.

If you are a vet in California, please submit deceased rabbits suspected of Myxomatosis for necropsy with a CAHFS state lab (fee $135) or report confirmed Myxomatosis cases to the California Department of Food and Agriculture (CDFA): [email protected].

There have been no recent cases of Myxomatosis reported to the Washington State Department of Agriculture from 2011-2022.

Symptoms may include swelling of the ears, nose, mouth and genitals, conjunctivitis, not eating, lethargy, loss of appetite, fever and lesions.

How is Myxomatosis Diagnosed?

Myxo is diagnosis by observing the symptoms and biopsies of the lesions. In many cases the diagnosis is made post-mortem, because of the sudden death.

What do I do if I suspect my rabbit has Myxomatosis?

What is the treatment for Myxomatosis?
Currently there is no effective treatment for Myxo in the United States. Most rabbits die of hemorrhage and or seizures within 10 days. Pain medication and sub-q fluids will make a rabbit more comfortable.

There are vaccines in other countries, but the strains of Myxo can be different therefore a vaccine that works in one area may not in another. We are still looking into this for further information.

Take your rabbit to the vet immediately if you are concerned your rabbit might have Myxomatosis, and separate them from any other rabbits in your home.  Your vet can determine whether your rabbit might instead have rabbit syphilis, an upper respiratory infection, or an eye infection, all of which are treatable conditions.

How can I protect my rabbit from Myxomatosis?

House your rabbits indoors with window screens.  Rabbits live longer, healthier lives when indoors. Because myxomatosis is just one of many concerns facing rabbits who live outdoors, House Rabbit Society recommends indoor homes for rabbits as the primary preventative, along with screens on doors and windows.

If you live in an area with reported Myxomatosis cases, treat your rabbits monthly with Revolution, to prevent fleas and fur mites.  Revolution is a prescription medication, available through your veterinarian.  Or, treat with over-the-counter Advantage, which provides protection from fleas (but not from mosquitoes or fur mites). Be sure to give your cats and dogs flea treatment, too. Don’t let your rabbit play outside if you live in an area with currently reported Myxomatosis cases.

Vectra 3D is a flea/tick/mosquito/mite/fly/lice repellent for dogs – using it on a rabbit is “off-label” use and could be harmful to your rabbit at the wrong dose. Santa Barbara rescue Bunnies Urgently Needing Shelter uses this medication as just one of their tools to try to keep rabbits safe. Please consult with your vet before using and get bunny-sized dose information from them.

For rabbits who must live or spend some of their time outside, protection against mosquitoes is next best bet, protecting the rabbit’s play area with mosquito netting or some other barrier. Read more on the hazards facing outdoor rabbits.

Why isn’t the vaccine in Europe/the UK available in the US?

The Myxomatosis vaccine available in Europe and in the UK has not been approved by the USDA’s Animal and Plant Health Inspection Service’s (APHIS) Center for Veterinary Biologics. There is no vaccine available in the United States, and it is not legal to import the vaccine from other countries.

Hilary Stern, DVM of Santa Cruz, CA has repeatedly tried to import the European vaccine and failed. Dr. Stern said, “The FDA won’t allow it because it is a live vaccine. I am not aware of any killed vaccines that are effective.“