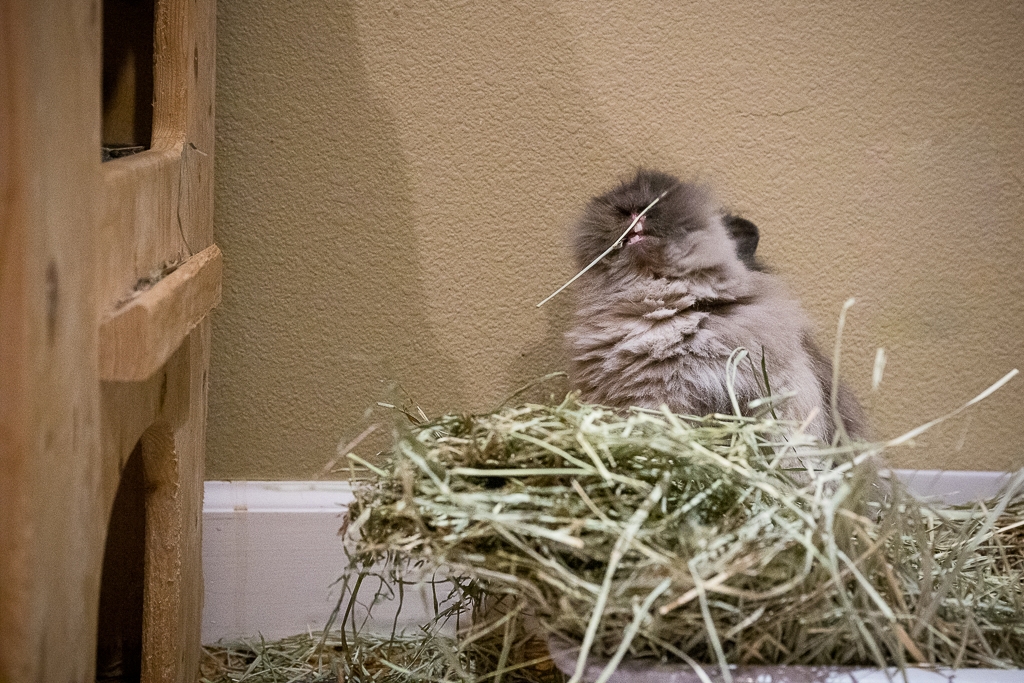 Why does your rabbit chew things other than food? Chewing is a normal, natural, necessary (and highly enjoyable) activity for rabbits. Here is information to help you understand why rabbits chew, as well as how to prevent destruction of your favorite furniture.

What are the psychological factors of chewing?

Females often have a stronger urge to burrow than males, although this is not the only reason rabbits chew. The hormone/age factors below also apply to males. Both males and females should be spayed or neutered as soon as they are sexually mature (4 – 6 months old).  Make sure they are chewing the right things–hay, non-treated grass mats, etc. Their teeth are always growing, so they need hard things to chew on to keep their teeth trimmed.  Provide plenty of fresh hay, cardboard boxes, etc.

Remember, a spayed rabbit will chew less and less as she matures. It may be just a matter of riding out a high-energy stage of your bunny’s life.

Chewers are often intelligent, outgoing, affectionate individuals who like to be in charge and get lots of attention. Does she chew to get attention? Would a companion alleviate boredom? Anything that would entertain her/make her happier might lessen her chewing.

What are the environmental factors of chewing?

Keep trying to find something harmless she enjoys doing. What kind of “burrow” (such as a cardboard box stuffed with hay), can you provide for her?

A box or wire basket can go over a group of wires. Browse a large hardware store for products to use for bunnyproofing.  Hardware stores make wire covers/cord conduit that go easily over your home wires.

Confinement (to a cage or room)

This simply buys you time, while you bunny-proof, get her spayed, or wait for her to mature.

Should I give my rabbit items to chew?

Yes. You can give rabbits pieces of the thing they want to chew: their own small towel, for example, providing they aren’t ingesting it.

Give your rabbit plenty of fresh hay–oat hay, timothy, orchard grass hay, and replace two times or more a day.

Items that are safe for rabbits to chew on:

Fruit tree branches, such as, apricot and peach are toxic while attached to the tree but not after they’re cut and dried (a month or more). For your bunny’s safety, keep your purchases of imported baskets limited to willow, the only basket material not sprayed with pesticide.

Does chewing carpet hurt my rabbit?

Yes, if they ingest the carpet fibers. Since swallowing indigestibles such as carpet presents a health hazard to your bunny, follow up excessive chewing incidents with a petroleum laxative such as Petromalt or Laxatone (sold at pet-supply stores).

Should I give my rabbit items to dig?

Yes. For digging, build a “tunnel” – top isn’t needed, just bottom, high sides, and end. Cover the bottom with a bit of carpet or something similar. Bunnies LOVE to dig at the end of tunnels. Same thing can be accomplished by putting a board with carpet tacked on between two pieces of heavy furniture against the wall…just be sure the board can’t move or the bun will be digging the carpet beneath where the board was meant to be.

Can I discipline my rabbit not to chew?

No. Discipline (clapping hands, saying “no”) will not stop chewing. Most people report that it’s easy to make their bunnies understand them, but difficult to make them stop the behavior through the use of discipline, especially if the bunnies are left alone for periods of time.

Rather than trying to discipline your rabbit, set them up for success with positive reinforcement of desired behaviors, an environment with enrichment with rabbit-safe items for digging and chewing, and remove their access to things they’re not supposed to chew.