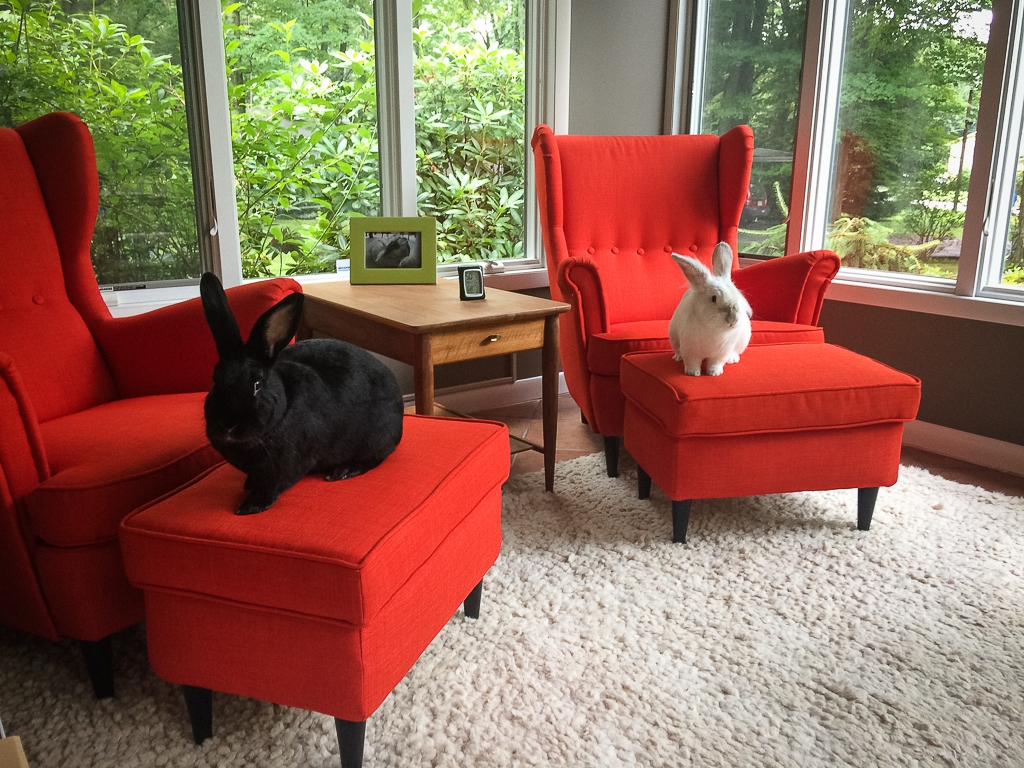 House Rabbit Society was founded by seven people at a dining room table in Alameda, California (the same table that’s on the cover of House Rabbit Handbook). The seven of us were Betty Tsubamoto, Ron Westman, Donna Duguay, Bob and Marinell Harriman, Amy (Shapiro) Espie, and myself. Our mission for HRS was based on two observations: that people needed to be educated about the needs of real rabbits, and that there were rabbits in shelters in need of good homes.

When we incorporated and filed our bylaws as a nonprofit in January 1988, we wondered if a government agency would find pet rabbits as important as we did. It did, and in May 1988, the IRS granted HRS a federal tax exemption.

House Rabbit Society‘s origins are directly linked to Marinell’s extraordinary book House Rabbit Handbook: How to Live with an Urban Rabbit. First published in 1985, the concept of rabbits in the house was like a sublime secret. In HRH, she interviewed over 30 people and their house rabbits, including Ron, Donna, Betty, Amy, and me. The response was phenomenal. Phone calls and letters came from all over, with people sharing their own stories, observations, and questions. Since HRH would not be revised for a few years, it became evident that an ongoing source of information was needed, especially with the rapid changes in veterinary medicine as more people began demanding care for their bunnies.

Then there was the phone call in 1986 that changed Bob and Marinell’s life: a reader of the Handbook called to say that four rabbits at a local shelter would be euthanized. Marinell recalls saying, “What are we supposed to do about it?” When she told Bob, he said, “We’ve got to help those rabbits.” Nowhere in the research for HRH had the critical problem of unwanted rabbits ever been mentioned.

Amy soon became a bunny foster parent along with Marinell and Bob. When HRS began, we had two foster homes, and seven people committed to spreading the word about the joys and needs of companion rabbits. We were joined by local fosterers Susan Stark in mid-1988 and Margo DeMello in 1989. As people learned about HRS, some, like Holly O’Meara, who started the LA chapter, said, “Yeah, I can do it. I can foster some rabbits.” Then came Sandi Ackerman in Washington and others in Illinois and Colorado.

House Rabbit Journal was the decidedly uncute name for the new HRS educational newsletter — after all, the focus for this publication is on real rabbits, and they’re cute enough. The first Journal’s house ad, used to summarize the purpose of the organization as well as to encourage donations and new members, was then as it is now: “Buy a bunny a little time to find the right home,” coupled with the graphic of a rabbit with a clock. A computer could have been used to put pictures of a rabbit and a clock together. But why use a computer when you can use a real rabbit with an actual timepiece?

The posterbunny for abandoned rabbits was a foster bunny named Freckles. When the clock was put on the floor, Freckles, excited by the new object, began to run circles around it. The charming touch of her paw raised thoughtfully was Freckles captured mid-step on film. And why 11:00? Because HRS focuses primarily on 11th-hour rescues, that is, on rabbits who have run out of time elsewhere. The Freckles photo quickly became associated with House Rabbit Society and was adapted to serve as our national logo.

A Decade of Accomplishment

At the end of 1988, HRS had 300 members; over 7,000 members now receive the Journal. Over the course of ten years, HRS fosterparents have rescued 6,931 rabbits, many of whom had run out of time at shelters. We have educators and fosterers in 27 states and into Canada, plus a network of chapters. Our medical conference in 1997 was attended by 200 veterinary professionals. And, in just a few years of operation, our Web site tallied its millionth visitor. Remarkably, all of these rescues and all of this education have been accomplished by an all- volunteer organization.

As of 2005, HRS has over 9,000 members with new people finding out about usevery day thanks to our website, which now receives about a million hits perweek, and the tremendous work of our volunteers around the world. Over thecourse of ten years, HRS foster parents have rescued over 15,000 rabbits,many of whom had run out of time at shelters. We have educators andfosterers in 33 states and into Canada, Australia, Hong Kong and Singaporeplus a network of chapters throughout North America.

In the 20 years since our founding, HRS has expanded to form a network of thousands of members and hundreds of licensed volunteers across the United States, Canada, Australia, Europe, and Asia. Today, HRS volunteers collectively produce the House Rabbit Journal, and the encyclopedic, award winning www.rabbit.org website. Our volunteers have, since 1988, saved the lives of over 20,000 rabbits. In addition, the organization is responsible for educating tens of thousands of people, including present and prospective rabbit caretakers, veterinary and shelter staff workers, members of other rescue organizations, and members of the general public. In 2000, HRS opened the first public rabbit-only shelter in the country, in Richmond, California, which serves as a model for animal shelters around the world. HRS volunteers are internationally recognized for their expertise in rabbit behavior and care, and are called upon regularly to give educational seminars at venues around the world.

On behalf of the current HRS board, thank you to all of you, volunteers and members: for accepting the new idea of bunnies as indoor companions, for providing loving homes to homeless rabbits, and for supporting our rescue and education efforts. Thanks for the donations, the energy, and, most of all, the time.